Two episodes into Fox’s new fantasy drama Sleepy Hollow and it’s already building a cult following. Ten million people tuned in to the series premiere, bringing the network the highest ratings in seven years. Which brings us to Nicole Beharie, the Julliard-trained star who carries the show as Abbie Mills, a cop fighting to stop the apocalypse alongside Ichabod Crane, a general who wakes up 200 years after dying (you have to watch the show to follow).

A Black female lead on primetime? Fox? Solid ratings? We wanted to know more. We spoke with Beharie during a break from filming the show in Los Angeles.

ESSENCE: Congratulations on a great series premiere and ratings. What do you do on a night like that? Were you home watching it?
NICOLE BEHARIE: I was working. I was shooting until two in the morning. Everyone was texting like. I was on my break so I was tweeting little things here and there. We’re still in the midst of shooting the season. It’s actually a wonderful thing because you don’t have time to check in to what’s going on. You just really have to stay focused and that helps because whether there’s a good response or a bad one, we just stayed in it and with it.

ESSENCE: It’s so great to see a Black woman on prime time as the lead. Besides Kerry Washington, there’s you. Pressure?
Yes, I think you just put the pressure on. [Laughs] My shoulders just fell. One thing I have considered is that the success of a show like Scandal and [Kerry’s] presence and Shonda Rhimes has opened up the minds of studios and executives. They know it’s possible. Even before that I liked Living Single. To me, all those shows were proof that of course it’s possible. Not only is it possible, but extremely entertaining and enriching. It seems to be a new idea to a lot of people in the country so I love that [Alex Kurtzman and Roberto Orci—the creators of Sleepy Hollow] took that leap and decided to put their confidence in me. 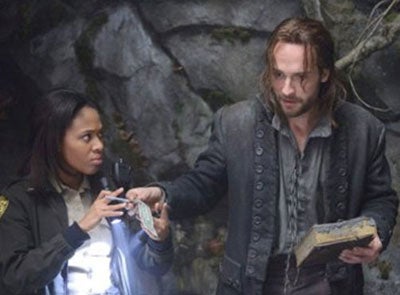 ESSENCE: You’ve said this is a role you’d never imaged yourself playing.
I’m 5’1’’ and an African American woman. I just didn’t think anyone would hire me to play the cop. There’s a certain demographic of girls who look the same in every action piece and I didn’t think that that was going to be me. I’ve always been a big sci-fi person. I love fantasy, so when the opportunity presented itself I wanted to take a shot at this. Getting to hold a gun and running away from witches and incantations…there’s so much more that you’re going to see in the season that just doesn’t really fit into what I keep seeing on Twitter or what I keep hearing some people saying like ‘Yes, you’re the Black person who doesn’t die.’ A lot of people were like, ‘You’re going to die soon right?’ and I’m like I don’t know you have to watch. I haven’t died. It’s kind of a joke in the community like we always die within 20 minutes.

ESSENCE: The show is so high-concept and fantastical. What attracted you to your character Abbie Mills?
I like that she grounds us. In the same way that people watch and they’re like there’s a lot going on, what’s happening? She kind of brings it into the headspace of slow down, break it down for me, what are you talking about, this is unbelievable. She’s absorbing everything at the same pace that the audience is and I think that’s a really great challenge to have someone have absorb everything and still move forward and fight the good fight. I love that about her and I actually like that the show gets a little ridiculous and bounces back and forth and turns a lot of things about history on its head because it keeps people guessing. The audience never gets ahead of it.

ESSENCE: It even tackles race in all of that and how the main character, Ichabod Crane, sees you as a Black woman because he’s coming from a time when there was few of us, if any, in those positions of power in his mindset from 200 years ago.
Totally, and I love that they didn’t really shy away from that. The first episode he was like, ‘You’re emancipated now?’ So its kind of fun to go there and look at how far we’ve come as well as some of the ways that we haven’t.

ESSENCE: It’s a huge year for you. Your role in 42 was a major moment for you. And now this.
I feel really lucky and I love that audiences are responding and that people are putting their confidence in me to be able to tell these stories. I’ve always thought of myself as a very strange bird. I don’t know if you know of Barbara Streisand in Funny Girl where it’s like you’re supposed to be doing something else and I ended up in this place sitting in a director’s chair, on a set with Harrison Ford or I’m seeing billboards around town with my face on it. I’m like, ‘That is insane.’ I just really wanted to do good work and work with good people and things are opening up in different ways. All I can say is that I hope that people stay and keep coming along for the ride and I’m so honored.