In 1991 America bore witness to arguably the most spectacular modern confirmation hearing for a Supreme Court justice. Law professor Anita Hill was dragged from relative obscurity to testify before the Senate Judiciary Committee as it considered President George H. W. Bush’s nominee, Clarence Thomas. Facing probing and often explicit questions, Hill testified that she was repeatedly the subject of unwanted sexual advances by Thomas during years of working with him in government positions.

Thomas, an African-American man, had been nominated to succeed Thurgood Marshall, the court’s first Black justice. Hill, a Black woman, was accused by many of being a race traitor for speaking forthrightly about her experiences of harassment. Many wondered what she had done to provoke or encourage the behavior. And Thomas denied Hill’s allegations and angrily referred to the process of withering and embarrassing questioning by the all-White, male Senate Judiciary Committee as a “high-tech lynching.” After three days of inquiry, Thomas was confirmed to the court by the narrowest margin in a century.

On April 16 HBO will return to those stunning three days that altered the course of American political history with the premiere of Confirmation starring Kerry Washington as Hill and Wendell Pierce as Thomas. Ahead of the film’s debut, ESSENCE caught up with Hill, 59, near her office at Brandeis University to talk about her journey since the controversial hearings.

MELISSA HARRIS-PERRY: What do you think of Kerry Washington’s performance in the film?
ANITA HILL: I loved her dignity and emotion. She appeared a lot more dignified than I felt during that moment, but she still lost nothing in terms of how painful the experience was. That is hard to convey, but she did it beautifully. 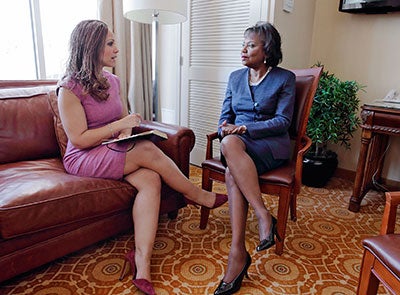 HARRIS-PERRY: One of the most emotional scenes in the film is when your parents are ushered into the Senate chambers during testimony that is explicit and degrading. What do you remember about what your parents endured during the process?
HILL: My parents were amazing people. They are amazing, because they’re still a part of my life, even though they’ve both passed on. My parents were born in 1911 and 1912. Think about what that means in terms of a lifetime—the pain and tragedy and oppression they -experienced in their own lives. Yet they raised 13 children. It was an extraordinary feat. They kept us centered by having us believe in ourselves and in one -another. And they instilled in us a belief in the promise of this country. I particularly credit my mother. She believed in possibilities that she had never seen. She wanted her first daughter to go to college in an era when many women were not even finishing high school. She didn’t prepare us for the world that existed; she prepared us for the world that was going to come. I am not sure that they—or any of us—fully understood what was happening in Washington during those confirmation hearings, but I do believe this was the moment they had prepared me for all my life. They were like so many parents today who feel they can’t protect their children from violence. What they could do was continually remind me that I was a valued individual, that I was a human being, and that I was surrounded by their love, and the love of the family and the love of God. At the end of their lives, we want our parents to have ease in their old age. The Senate voted to confirm -Clarence Thomas on my mother’s eightieth birthday. It was a difficult time for all of us, but we got through it the same way we’ve gotten through generations of turmoil—with one another.

HARRIS-PERRY: During the hearings it seemed that few in the public sphere were questioning how the process was violent toward you and your family. Instead it was Justice Thomas who used the metaphor “high-tech lynching” to describe his experience. There is a key -scene in the movie when Washington expresses outrage about his using the word lynching. Is this an authentic moment?
HILL: Yes. I did find it outrageous. My grandfather was threatened with an actual lynching. It was 1905 and he homesteaded land. He settled his wife and eight children into a two-room cabin on his own land. It was obviously very modest, but it was his property. He believed in America’s promise and was ready to take advantage of all the opportunities it offered. Neither the federal government nor local authorities did what was necessary to enforce his right to own property. His land was taken away and he had to flee a real threat of lynching. The only thing I regret about this story is that we only tell my grandfather’s side. We never tell my grandmother’s part of the story. We didn’t grow up hearing the stories of African-American women suffering when their families were destroyed. We didn’t hear their point of view. I think that’s why the lynching metaphor was effective in 1991, because Black women didn’t know our own stories. We did not claim a clear political or social identity in terms of what had happened to us all those years in the context of racial and sexual violence.

Exclusive: Kerry Washington Hopes Role as Anita Hill in HBO’s ‘Confirmation’ Will Be a Conversation Starter

HARRIS-PERRY: Right. We don’t have a trope that we can deploy in that way. You could not capture the violence you were experiencing by saying, “This is a high-tech blank.”
HILL: Historian Crystal Feimster has written about African-American women resisting violence and seeking justice. There were even women protesting sexual violations by the military during the Civil War. Resistance is part of our legacy. We did not simply sit behind the scenes and absorb abuse. Imagine former slaves going to the federal government and saying, “You have to protect us. It is our right to be protected against the sexual violence!” There are so many amazing stories, but until we uncover our own history, we are not going to be able to develop that trope. Once we recover those stories, they’ll become part of who we all are, part of our entire American story.

HARRIS-PERRY: What difference did it make in the hearings that those stories were lost and that the -nation does not have a context for understanding Black women’s experiences?
HILL: I’ve had almost 25 years to think about this. Let me ask this very basic question: What if the Senate had actually taken me seriously? What if they decided that they were going to use this as an opportunity to reflect best practices in the workplace? I think they would have done a thorough investigation, not a rushed investigation led by the FBI, which had, as far as we know, very little experience investigating sexual harassment. It would have meant calling qualified experts in sexual harassment. It would have meant throwing out irrelevant testimonies and calling all the witnesses who were testifying to similar patterns of behavior. What if they had reflected best practices? How much pain and anguish could they have saved American women? How might that have changed the way women in this country think about our -workplaces and about how we are represented in our government? That’s the question I want people to be asking 25 years later—what if they had done the right thing and not the politically expedient thing?

HARRIS-PERRY: Has any member of that Senate Judiciary Committee ever reached out to you over the course of the past 25 years and asked you what the right thing would have looked like from your perspective?
HILL: Never. I have never been asked that question by a member of the committee. They could have asked me very simply,
“As a citizen who was involved in the process, what do we owe you? As a citizen with information, how can we make sure you are heard?” Even 25 years later it is still worth asking how we can make sure that when representatives call citizens to speak, their government actually hears them. Maybe we could still have that conversation now, because it truly meant something to me. I knew that there was a risk in speaking, but I also knew that it was a responsibility I had as a citizen. It is important for our government to honor that.

HARRIS-PERRY: How did race and gender affect how you were heard -during your testimony?
HILL: Those members of Congress had never even considered that Black women had our own political voice. They assumed that Black men spoke for us. For an African-American woman to have her own political voice and own political position, and to believe that our perspective should be added to the conversation, was just something they hadn’t even considered. I think that’s why, politically, things changed. I think that’s why women -became so agitated and so energized to make change on this important issue. And for Black women, it was like, Okay, we have to make sure we are speaking for ourselves.

[Editor’s Note: In the aftermath of the Thomas confirmation, a record number of women sought elected office, and 1992 was deemed “The Year of the Woman.” Twenty-eight additional women were elected to the U.S. Congress, -including Carol Moseley Braun, the first Black woman elected to the U.S. Senate.]

HARRIS-PERRY: What is next for Anita Hill?
HILL: It feels good to be back in the classroom after a three-year break, but I am ready for a more public -presence. I am not certain what that will look like but I know I want to write and speak and teach. I want to be sure that we are thinking fairness and -inclusion in our universities as we approach the fiftieth -anniversary of Title IX in 2022. We’ve made great advances in the areas of women’s sports, and we’re beginning to put into place processes for eliminating sexual harassment and assault in higher education. However, Title IX -addresses more than sports and sexual assault. It is also supposed to eliminate barriers to full participation in all aspects of education, including universities as places where women come to learn and where women go to work. I’m working on a project that aims to increase awareness of how this law can improve the experiences for all girls and women—especially girls and women of color. I will also propose new strategies and plans for increasing parity and inclusion in education.

HARRIS-PERRY: You said that your mother did not prepare you for the world as it was, she -prepared you for the world that was coming into being. If you could imagine any world for Black girls 25 years from now, what would it look like?
HILL: I imagine African-American girls with a view of a life that -completely disregards all the people who say you can’t be what you want to be in this world. A world where confident young women don’t carry the baggage of those who say, “No, you don’t get this.” But that’s only half the story. The other part I imagine is a world where these girls walk into a room and everyone agrees with them that they can have whatever they want and are willing to work hard to get. That’s what the entire world would look like.

Melissa Harris-Perry is an ESSENCE contributor and the Maya Angelou Presidential Chair at Wake Forest University, where she’s also director of the Anna Julia Cooper Center.