For months, there’s been much buzz over the debut of Tyler Perry’s new steamy and deceptive film, Tyler Perry’s Temptation. And today, we’re getting our first exclusive look at photos of the film starring Jurnee Smollett-Bell, Lance Gross and Robbie Jones.

The film follows Judith (Smollett-Bell), a marriage counselor who gets involved in an inappropriate relationship behind Brice’s back (Gross). The man whom Judith becomes entangled with, Harley (Jones), is a fine business man whom she meets at work. Things become tricky for Judith when the lines between work and pleasure become blurred.

Smollett-Bell provides insight into the exclusive photos. Check out her commentary:

Photo 1 (Above): “At this point in her life, my character, Judith, is very restless and frustrated with her dull marriage and sluggish career,” says Smollett-Bell. “Judith has ambitious dreams and is afraid that she’s getting stuck and settling for less. She vents to her husband, Brice, about wanting more out of life, but he quickly discourages her dreams. Brice is complacent, and has become emotionally unavailable in their relationship. He often takes Judith for granted and is the kind of guy that would be perfectly happy with letting 15 years pass by without any significant change… which drives Judith crazy because she yearns for more.”

Photo 2 (Below): “Judith finds herself in a passionate affair with Harley, a billionaire entrepreneur who seems to offer her everything she has been missing in her life,” explains Smollett-Bell. “He stimulates her creatively, emotionally, and physically. Most importantly, he believes in Judith and encourages her to take risks and go after her dreams. But the risks are greater than Judith initially realizes. This dilemma Judith finds herself in, and the choices she makes have a significant impact on her for the rest of her life.” 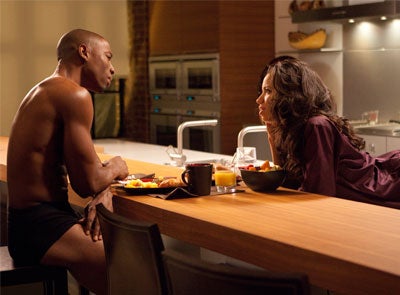