Before his death in 2010, Eugene Allen was one of few men who had personal encounters with the last 12 Presidents of the United States. He was a butler at the White House for 34 years and served eight of those men. Award-winning Washington Post journalist and author Wil Haygood was the first to tell his story and now Hollywood is doing the same.

Haygood is the author of The Butler: A Witness to History (Simon & Schuster) and associate producer of Lee Daniels’ The Butler. He tells us about meeting the man who inspired the film and what Eugene Allen had hidden under lock and key.

ESSENCE.com: How are you feeling now that the movie based on your Washington Post front-page article is about to hit theaters this weekend?
Wil Haygood: Very fortunate and humble. There’s a great personal family connection here. My grandparents are from Selma, Alabama and they raised me. When I reached the set, I knew in many ways this was every Black person’s story. Little things like when Oprah says, bring me up my can peaches from the basement. That was my grandmother! 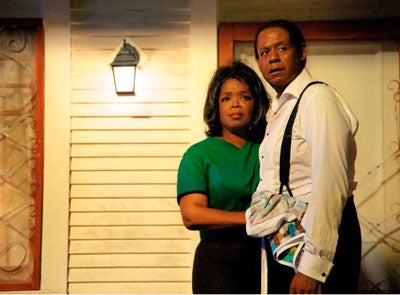 Forest Whitaker and Oprah Winfrey in 'The Butler'

ESSENCE.com: The country will soon remember the 50th anniversary of the March on Washington. Having grandparents from the South, do you remember them talking about the difficulties of that era?
Haygood: Oh sure. I remember my uncles talking about making sure the gun was safely under the seat in the car because they were getting ready to drive back to the South all night. They couldn’t stop at any hotels. Those are real vivid stories within many of our lifetimes and within the borders of our own country.

ESSENCE.com: What was it like interviewing Eugene Allen, the man who is the inspiration for the film?
Haygood: He was a living treasure who was hidden away on this quiet street—just he and his wife. This was one of those eureka moments as a journalist. Hearing their stories upstairs in their home was one thing but when he unlocked his basement, which was under lock and key, that was something else. Nobody got invited into that basement unless his wife Helene of 65 years felt that she could trust this person implicitly. We would not be seeing this movie today if it wasn’t for her.

ESSENCE.com: What was in the basement?
Haygood: Mr. Allen had all this secret information. He listened to FBI agents, CIA agents, and officials from the Justice Department all in meetings at the White House. He was essentially a fly on the wall for 34 years at the most powerful address in the world. I was thinking maybe there was one scrapbook hidden under the sofa like a Bible. He worked for eight presidents, both President Bushes invited him back to the White House, he met Bill Clinton and he saw Barack Obama. This man laid eyes on 12 Presidents of the United States and we may never know another person in history who has done that. But in that room were photos, letters, and gifts from all eight presidents. It was like a mini Smithsonian archive. It was stunning and I knew if I could write this story correctly, life for him would never again be the same. In a way, I believe my story brought Eugene Allen up out of the basement. It lifted him up into the sunlight where he belonged.

ESSENCE.com: Why should Black women go see Lee Daniels’ The Butler this weekend?
Haygood: For the simplest of reasons—Love won over discrimination, over heartache and over pain. The love of a good wife has no equal on this Earth. Mr. Allen was blessed to have a wife like Helene who kept the home fires burning, raised their only child and knew how to be discreet as the spouse of a major White House employee. She understood that there were things that she simply could not talk about and she never betrayed his trust. I think that’s why their marriage and love endured for 65-years. I owe Mrs. Allen a lot.