By Paula Rogo · Updated October 23, 2020
Ethel Ayler, the actress who played Clair Huxtable’s mother on The Cosby Show, has died. She was 88. Her death, which occurred on Nov. 18 in Loma Linda, California, was only announced this week in The Mobile Register and Baldwin County obituaries. The cause of death was not given. Born in Whistler, Alabama in 1930, Ayler had a long career that spanned over five decades. She was best known for her role as Carrie Hanks on The Cosby Show from 1984 to 1992. Ayler said she named her character after her grandmother. 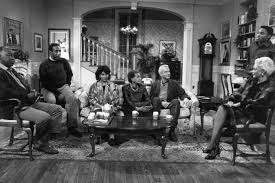 She first started acting after moving to Chicago in 1946 from Nashville, where she had been a voice major at Fisk University. It was in Chicago that her breakthrough came with a role in Porgy and Bess, according to Deadline. She went on to star in a number of off and on Broadway shows, as well as TV and film, including August Wilson’s Broadway play Fences, Kwamina, Black Picture Show, The Cool World, Eve’s Bayou, The Bodyguard, Martin, and Family Ties. Our thoughts are with her family during this time.