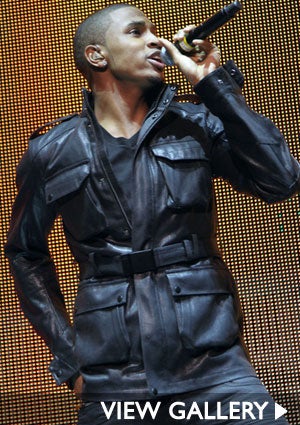 Trey Songz is a busy man. At 25, he just began the nationwide BP3 Tour 2010 opening for Jay-Z, his third album “Ready” was just certified Gold exceeding sales of 500,000, and he just participated in the remake of the classic “We Are The World” benefiting Haitian earthquake relief. During a break on his touring schedule in Dallas, Songz chatted with ESSENCE.com about the messages in his music, what it’s like to work with superstars like Jay, Stevie Wonder and Barbra Streisand, and why he’s excited about performing at the ESSENCE Music Festival. ESSENCE.com: Congratulations on going Gold, how do you feel about that? SONGZ: I am proud. It’s an achievement to say the least. It’s my third album and it’s the first one to go Gold. But I don’t want to be stuck in that moment, I want to make sure that I strive to do whatever is next. I am excited that the album is doing very well, you know, but I’m chasing Platinum now. ESSENCE.com: I hear that for sure, so talk to me about your music. It really resonates in the clubs and particularly with the ladies. SONGZ: Musically, I want to make good music that people can feel. Music sets a tone like a soundtrack for your life. And, with the music I make, I know that I am making you laugh, making you feel sexy, making you wanna dance, make you wanna make love, whatever it is. I am trying to make good music that people can feel and people can relate to. The ladies just happen to relate to it a little more, and I appreciate that. ESSENCE.com: At the BET Honors you got to perform with Stevie Wonder and sing “That Girl.” What was it like for you to perform with Stevie? SONGZ: That was like a highlight of my career right there. That’s Stevie Wonder, he is beyond a legend in my eyes. He is iconic, he was playing drums for Motown 50 years ago, before he got any credit. I know a lot about Stevie, I studied his music. Being able to do that means that I am at a certain place in my career where I can stand next to those people and have conversations with them and be respected by them. As a man, that’s a beautiful feeling. As an artist, it’s even more fulfilling. ESSENCE.com: What were you guys joking about onstage? SONGZ: I said, “Stevie, I got this song, I wanted to know if you wanted to play around with it while we’re on stage.” And, I started singing the melody and he was like, “I know that song, ‘I Invented Sex.’ He was like, I invented sexy, I got seven kids, I’m trying to start a basketball team.” So we were just joking around about that on stage. I had the time of my life up there. ESSENCE.com: Being on tour with Jay, what’s that like? SONGZ: Jay-Z is one of the biggest touring acts in the world, he sells out arenas in minutes and to be a part of that is amazing. Furthermore, Jay-Z is one of the most influential artists in my career as well as in my life. You know, seeing him go from artist to entrepreneur to businessman to multi-business owner, and to be that close to him is amazing. It’s a pleasure. I go on right before Jay-Z, and Jeezy comes in within his set. So it’s an honor that he would want me in that spot, so I am happy to be a part of it. And, I am here to step up to the plate and bring the best show I can to the table. ESSENCE.com: You were involved in “We Are The World.” What was it like for you to be a part of that remake and to be in the room with all those artists at one time? SONGZ: Once again, it’s very fulfilling as an artist, you know, as someone who saw this as a dream only a few years ago.  “We Are The World” was one of the biggest songs in the world. And, although I didn’t get a solo, it was really not about that. It was about playing that song, knowing that song, and knowing that I was a part of it. I was two rows back from Barbra Streisand, with Natalie Cole standing next to me. You know, in the same room with Lil’ Wayne and Snoop Dogg. I think what’s most beautiful about that was that it was different cultures together and everybody gathered for the same purpose. Egos were left at the door. It just shows, again, that I am at a certain point in my career, and the respect level is going up. I am very humble and happy to be a part of all the things that I am a part of. ESSENCE.com: You are performing at the ESSENCE Music Festival this year. It’s your first time. Have you heard about it? SONGZ: Of course, it’s an excellent celebration and I’ve seen the press releases on it, I have friends who’ve been involved in it and I know how big it is for Black culture, so to be a part of it is definitely a treat.   Read more: For more information on the ESSENCE Music Festival, click here.