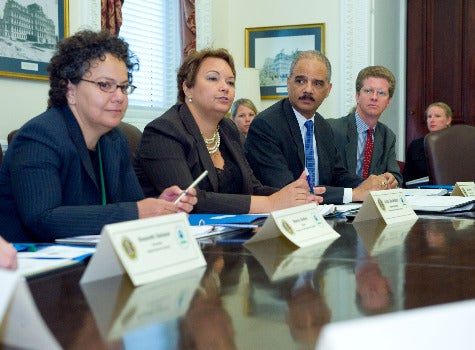 In January of 2009, on her first day on duty, Environmental Protection Agency Administrator Lisa P. Jackson (second from left) granted her first interview to ESSENCE. During our conversation in her then bare-bones office, Jackson, the first African-American to lead the agency, listed a few of her goals: Jackson has since accomplished all of these, most notably shining a light on environmental challenges facing poor communities of color. She’s filled her staff with diverse officials who represent the Black and Hispanic communities hardest hit by pollution, including the agency’s first Senior Advisor for Environmental Justice. She has partnered with the Congressional Black Caucus to launch an environmental justice tour, meeting with impoverished communities in Mississippi, South Carolina and Georgia, to address toxic waste disposal, air pollution and poor water quality. She’s also awarded grants to environmental justice groups around the country.   On Wednesday morning, Administrator Jackson added another layer to her EJ Mission by holding a meeting with several fellow Cabinet members; Attorney General Eric Holder, Interior Secretary Ken Salazar, HUD Secretary Shaun Donovan, and Transportation Secretary Ray LaHood — as well as representatives from other federal agencies, including Health and Human Services, Education and Labor. It was the first time in more than a decade that the agencies have convened about environmental justice, in a body called the Interagency Working Group on Environmental Justice, despite a Clinton-era mandate establishing the group and requiring them all to tackle the issue.   ESSENCE.com spoke with Jackson about the group’s historic meeting, and whether they can really bring an end to the problem of environmental racism.   ESSENCE.com: In the 90s, President Clinton ordered the creation of this interagency working group, but this is the first time all the agencies have met about EJ in over a decade. Why had it taken so many years for the group to convene? ADMINISTRATOR LISA P. JACKSON: We had so many Cabinet members who showed up today with such a high energy level about environmental justice, and part of the reason they came in person was to tout the things they’ve done already. After the beginning of the administration, they’ve now had time to incorporate EJ priorities into their work. Now is the right time for us to meet, because it allows us to build on that foundation.   ESSENCE.com: What are some examples of the environmental justice work that agencies have already been doing? JACKSON: Here at EPA, we have new rulemaking guidance mapping out how our rules at EPA, in ensuring clean air or clean water, ensure that for all communities. We’re also part of a Sustainable Communities partnership, with the Department of Transportation and the Department of Housing and Urban Development, that’s about empowering communities to demand access to recreation, transportation alternatives and energy-efficient housing. The Attorney General mentioned his commitments to ensuring that environmental enforcement is happening across our country, including in low-income communities and communities of color. Shaun Donovan talked about the enforcement of the Fair Housing Act, and making sure that disaster relief money is fairly and equitably given to help communities build back better. He touted HUD’s work with Gulf Coast states and cites.   ESSENCE.com: Your immediate next steps involve holding monthly meetings and having each agency coordinate their EJ activities. But in terms of longer-term goals, do you foresee an end to the unbalanced decision-making that creates problems in the first place? Will things like locating hazardous waste sites in poor Black neighborhoods, or building schools next to highways, be something of the past? JACKSON: Absolutely. This group is focused on longer-term strategic opportunities. We can all go back to our agencies and change our programs, but what’s really going to yield the biggest results are strategic changes — where we work together to ensure that there’s housing money, and transportation money, and EPA regulatory assistance all focused on helping a community do exactly that. The goal is to empower a community to make sure that citing decisions, and decisions about transportation methods and roads, are all coordinated to get different results — not just marginally better, but dramatically different results. For more of Cynthia Gordy‘s Obama Watch stories, click here.