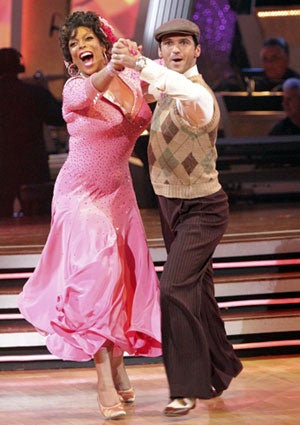 There was lots of twirling and turning on this week’s episode of “Dancing with the Stars.” But it’s what you’d expect from an episode dedicated to the jive and quickstep. Lucky for them, unlike previous seasons where eliminations were handed out in the first week, all the celebrities got a chance to redeem themselves from a less-than-impressive season opener.

Even Wendy Williams, who got off to a rocky start last week, was able to quickstep her way to a favorable score from the judges. Take a look at three of the most memorable moments from last night’s episode.

If you dish it, you’ve gotta expect it dished back, and nobody knows that better than talk show host Wendy Williams. After a less-than-impressive turn on the dance floor last week, she couldn’t help but state the obvious: “People are talking, and we’ve got to get this thing down,” she told partner Tony Dovolani. Even though Wendy was worried about her breasts (“They’re not bouncing,” said Tony) the pair did “their thing” in the quickstep. Wendy seemed a lot more comfortable than last week. She earned 17 points, bringing their overall total to 31.

While Sugar Ray Leonard promised to bring his boxing moves to the dance floor this time around, he seemed to hold back on the fancy footwork when it came to time to do the jive. Oh, how we wish the boxing champ could utilize some of his excellent jump-rope skills on the dance floor. And we could do with a little more punch (pun intended) in his routine. The judges gave him 17 out of 30, bringing his overall total to 34.

Pittsburgh Steelers wide receiver Hines Ward isn’t letting his “big guy on the dance floor” status tamper with his moves. Hines gave so much energy while doing the quickstep to Stevie Wonder’s “Part-Time Lover,’ judge Carrie Ann Inaba gave him the title of “twinkletoes” once bestowed on football great, Emmitt Smith. We can’t wait to see what Hines and partner Kym Johnson have in store next week. The judges gave him 23 out of 30, bringing his overall total to 44.

Other notable performances included Kirstie Alley who represented so well for plus-sized women. Though she’s still self-concious about her weight, Kirstie didn’t seem to have a care in the world once she hit the dance floor. Like the judges, we give her a 20.

What was your favorite performance on last night’s episode of “Dancing with the Stars”?