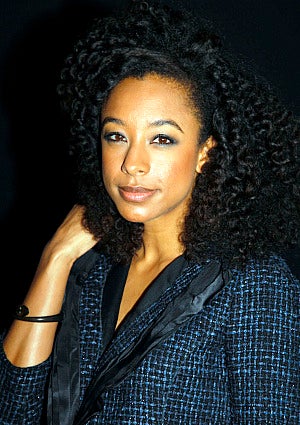 We can’t get enough of Corinne Bailey Rae’s latest album, “The Sea,” but at the moment, we’re stuck on her sultry, new single, “Closer.” If, by chance, you’ve been sleeping on it, be sure to check out track #5…and hit repeat. Four years ago, Bailey Rae appeared on our radar with her self-titled debut. Not only was her sound a welcome departure from the mainstream clutter, but we were also touched by her sweet, simple lyrics. Her hit singles “Put Your Records On” and “Like a Star” made her a household name, and for her efforts she earned Grammy nods and a legion of fans that stretch from her Leeds hometown, across the water and beyond. Just as her star was rising, personal tragedy struck when her husband died of an alleged overdose two years ago. It’s obvious that she poured her emotions into this album, which transitions between love and loss and hope and longing and grief and every emotion in between. As we discovered during our interview, she’s still working through it all. “In a lot of ways, yes,” she noted about how the loss has affected her art. Then, after a pause, she continued. “I feel like I can’t quite answer that question right now.” Understandable. ESSENCE.com caught up with the British songstress as she prepped for her upcoming North American tour to discuss her sophomore album, what she’s stashing in her travel bag and how she keeps the melodies flowing. ESSENCE.com: So, are you ready to hit the road? CORINNE BAILEY RAE: Absolutely! I’ve got my clothes to sleep in, my knitting and my guitar and I’m just itching to get on the bus to travel so I can play these songs over and over again. Every time I play them, I feel l like I’m learning new things about them and myself. ESSENCE.com: Has it been difficult to sing the new songs? BAILEY RAE: It’s been difficult to have those experiences, but I don’t think it’s difficult to [sing] about them. I think it’s important to express yourself and not hide from things. I’m really happy with this record because I had a lot of freedom to say what I wanted to say. ESSENCE.com: How has fan response been so far? BAILEY RAE: It’s been really good, actually, and quite surprising. You always forget that when you make an album, it goes out [into the world] and people hear it, buy it and listen to it. It’s still amazing that when you play a new record, people actually know it because they’ve been listening. My audience is a real mixture of different kinds of people. Everyone looks different, they’re different ages and have different faces and I feel so happy when I look out into the crowd. There’s not a certain demographic that’s being aggressively marketed to. They are people who have found their way to the music, independently, and I’m just playing to them. ESSENCE.com: So, how do you define success at this point? BAILEY RAE: I feel like I’m searching for a certain kind of success because I’m always trying to write a good song. Every time you start a song, there’s a really exciting point where you’ve got maybe two lines and some chords, but in your head, it could go on to be the greatest song ever. I always want to write something which I feel is personal, but also, universal; something that has an unusual melody that nobody’s heard before, but at the same time, it’s familiar enough for the milkman to sing along and the kids will like it, too. So, I don’t think I’ll ever feel like, “Oh yeah, here I am, I’ve made it,” because I’m always trying to write songs that are going to stay around. ESSENCE.com: What are you most looking forward to on your journey as woman and an artist? BAILEY RAE: I’m trying not to look forward. You can miss out on experiences if you’re always looking forward, so I guess I’m looking forward to appreciating “now.” [laughs] My most overused phrase is “I can’t wait for…” I want to get into the space of, “OK, what are we doing right now…driving around these hills, singing these songs, getting ready to do this show.” I’m just trying take it all in. Read more: