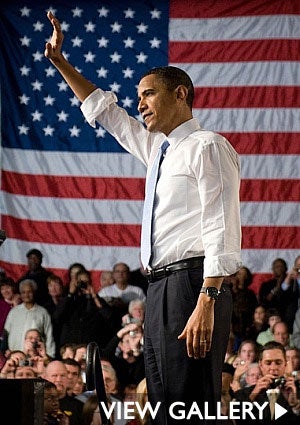 Throughout his political career, President Barack Obama has frequently referred to his years as a community organizer on the South Side of Chicago. During this time, as a means of achieving social justice, he learned how to develop leadership potential and respond to the needs of the people. The organization in which he got his start, the Gamaliel Foundation, is a faith-based group that helps create grassroots change around jobs, housing, health care and other issues. ESSENCE.COM talked to Gamaliel’s President, Ann Smith, about President Obama back when he was just starting out, and the impact he’s had on a new generation of young organizers. ESSENCE.COM: You must have so many stories about President Obama, from back when he started community organizing. Can you share some? ANN SMITH: Greg Galluzzo [Gamaliel Foundation co-founder and executive director] always says that when he met Barack, he never thought of him as having the potential to become President. When Barack went off to Harvard Law and came back to get people registered to vote, he led a training event for us. After he finished training, someone in the audience said to Greg, “You know, I think he’s going to be the President of the United States one day.” When he was an organizer, he was extremely disciplined and wrote wonderful weekly reports for all of the three-plus years he was there. Of course, at some point Greg threw them all away. (laughs) There’s not a single one left. But at the time, people didn’t see him for what he was going to be. They just saw him as being extremely intelligent and someone who could take advantage of opportunities, which he did. ESSENCE.COM: Now that he’s one of the most famous former organizers in the world, how has his prominence affected your foundation? SMITH: When I came to the Gamaliel Foundation almost seven years ago, the idea was that my job would be to connect with foundations, the media and other organizations to tell them what we do. It used to be difficult to tell people what a community organizer is. As soon as Barack said he was a community organizer during the campaign, it became very clear, and I don’t have to explain to people what it is that we do anymore. They already know. ESSENCE.COM: Have you seen a spike in people wanting to become organizers? SMITH: Oh yes, there have particularly been more young people going into training, and that was certainly sparked by the election season. During the election, people who were organizing for Barack in various places around the country actually came and went through the Gamaliel training because they wanted to do what he had done. We’ve seen many examples of that. My own cousin is an attorney, and she went through our training because, as she said, “I want to do exactly what Barack did.” Read More: