It’s been less than 10 days since she brought home her newborn daughter, Haley Joy, and Hoda Kotb has already fully adjusted to a life of bottle feedings, diaper changes and lots of laundry.

“We just stayed in the apartment and ate and slept and burped and took naps, and that’s it. That’s all. But it’s fun!” the Today show host says, sitting down with PEOPLE for an exclusive photo shoot and interview in the nursery of her Upper West Side penthouse on Feb. 23.

Bonding with her baby girl has been particularly emotional for Kotb, 52, who had all but given up on dreams of becoming a mother. A decade ago she battled breast cancer; the treatment left her unable to conceive, and less than a year after her recovery, her two-year marriage to tennis coach Burzis Kanga ended in divorce.

“One of the things in my life I’ve always wanted was to be a mom,” Kotb tells PEOPLE in its newest issue, on stands Friday. “Sometimes in your life, things just don’t work out for whatever reason, so you say, ‘Well, I wasn’t meant to have that.’ But it was really hard to come to terms with it.”

Friends say Kotb never spoke publicly of her desire to have children.

“Hoda is such a grateful person. She’s not a whiner or complainer, so she rejoiced in the blessings she had, and she loved being an aunt and found great joy in that,” says her Today co-anchor and close friend Kathie Lee Gifford. “It seemed like that was enough for her. She never let on that it was something missing in her life.”

Privately, though, “there was a hole,” Kotb says. “People would say, ‘Oh, do you have kids?’ And I’d feel like, ‘Ouch.’ I knew inside it was supposed to be for me.” 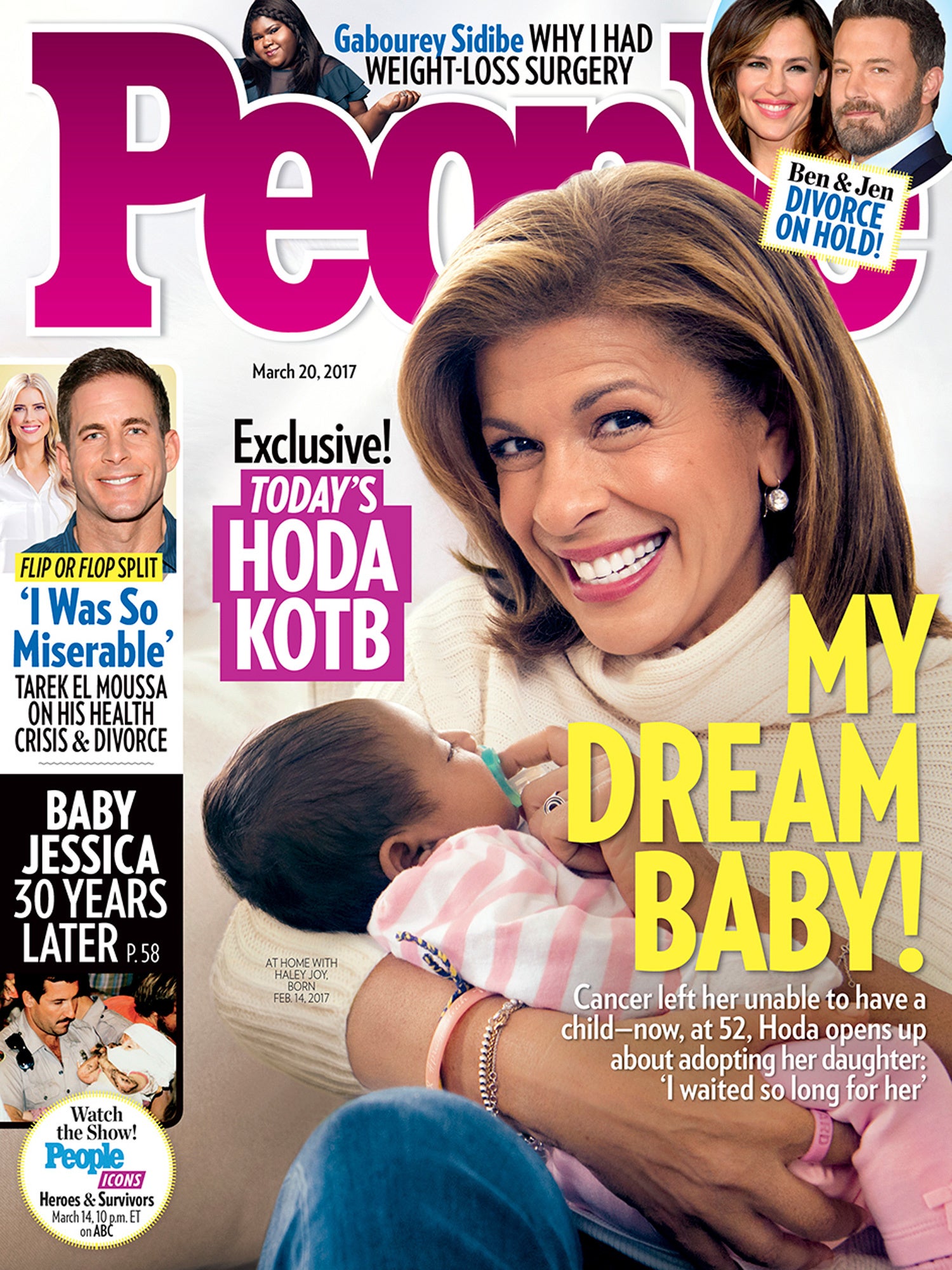 Kotb often fantasized about changing careers and becoming a schoolteacher or running a summer camp.

“One of the reasons was because I couldn’t have children,” she explains. “Finally I said to myself one day, ‘Why can’t I? Why not me?’ I had this ache in me that I couldn’t push away anymore.”

As Kotb began making arrangements last year to move in with her boyfriend of three years, 58-year-old financier Joel Schiffman, she broached the topic of adoption.

“I was afraid to even say it out loud, because then it felt so real,” Kotb recalls. “I said, ‘Think about it for a day or a week or whatever.’ And he said, ‘I don’t need a day. Let’s get this journey going.’ At that point I blubbered like a baby. It was like the dam burst.”

Kotb worked with a licensed New York adoption agency— to simplify the process, she left Schiffman’s name off, though, she says, “Haley will call him Dad”—and within a matter of months, finalized her adoption of daughter Haley Joy, who was born on Valentine’s Day and weighed in at 8 lbs., 8 oz.

(Kotb flew to another U.S. city to pick up her little girl but is keeping details of the adoption private to protect its confidentiality.)

Now, as she continues adjusting to her new life as a mom, Kotb, who with the blessing of her Today show bosses is taking time off to bond with Haley, says she is often struck by how much has changed so quickly.

“I wake up sometimes and go, ‘Oh my God, I have a baby!’ ” she says with a laugh. “But it feels totally real. I guess if you’ve been waiting this long for something, and you wish for it, pray for it, hope for it, wonder if it will ever be, and then it happens, nothing’s more real. Nothing.”