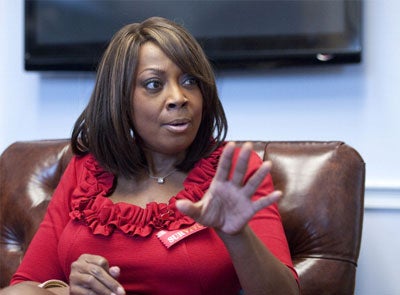 It’s Monday morning and we’re still recovering from last night’s episodes of “Celebrity Apprentice” — which drew out the claws and fangs from the ladies team! This week’s task was to put together a four-page editorial ad for Trump hotels. Though both teams had good intentions, both failed miserably — leaving Trump not to declare a winner but rather who did less worse. After that, the boardroom was lit on fire by NeNe, Star and La Toya. Check out the show’s top 5 moments including who was sent home packing…

Trump for President
In an odd moment before the teams recieved their challenge, Trump asked if he ran for President, would they vote for him. The looks on team’s faces were priceless! It’s clear that they don’t want Trump running this country, and we agree — he needs to stay in his lane! He can barely run “Celebrity Apprentice.” But it was interesting how the timing of the episode coincided with his recent remarks on Obama.

Coming to Jesus Meeting
Right from the get-go, NeNe had a nasty attitude. Girlfriend was still upset over La Toya’s comments from last week’s episode. While the team was sitting down planning their new challenge, they decided to have what Star calls a “coming to Jesus meeting,” where they put all their emotions on the table. NeNe quickly realized that she hurt La Toya over and over again during the course of the show. After sharing words, the two came to a truce and ultimately kissed and made-up. But just moments later NeNe was insensitive yet again to Star. NeNe needs to wake up and stop being so rude to her teammates. She’s there to raise money for a charity not to make friends. Girlfriend is straddling the line of sophisticated/smart and hot ghetto mess/drama queen!

Presentations Gone to Hell
The women’s team put on a God-awful presentation. It looked more like a elementary school pageant than anything else. Under Star’s control, the team players looked more like puppets popping in and out with random words to describe the Trump experience like “elegance,” “beauty,” “luxury.” Could it have been any worse? But La Toya had the best word of the night: “Corny!” It was a total mess — they needed to go back do it all over again. On top of that, their photo shoot ideas were a completely boring! They lacked originality and spunk — perhaps someone else with more creative juices should have taken on this challenge. And the mens’ team had so many issues, where do we begin?

Star Runs the Circus
Of course when Star Jones rules, she rules with a heavy hand. But now we’re starting to see that Star is slick and, may we say, manipulative in her ways. While sitting with her team across from Trump, she decided to pull both NeNe and La Toya into the boardroom after learning her team did worse than the men. She was hoping NeNe would co-sign with her to fire La Toya and that’s what happened. But we have to admit, it was shady! Our question is: why didn’t Star pull Hope into the boardroom? That “broad,” as she refers to her, isn’t worth a few dimes in our book.

Boardroom Cat Fight
The three enter the board room. Star suggests beforehand that they all tell the truth and “let the chips fall where they may.” But we know Star had other plans — meaning she wanted La Toya out! The entire time Star was working like a slick fox dodging being fired. The conversation shifted to who was weaker and who needed to be eliminated so a strong team could move forward. La Toya tried her best to defend herself and she made some valid points, but it wasn’t enough — she was fired. Upon her exit, she didn’t say anything to Star but gave NeNe a hug. After this episode, our feelings towards Star have changed big-time — she’s not as nice as we all thought.

Next week, NeNe looks like she’s about to explode. She gets in Star’s face and lets her have it! Oh the drama! Catch it next week and join our conversation on Sunday night at 9pm on both Twitter and Facebook.