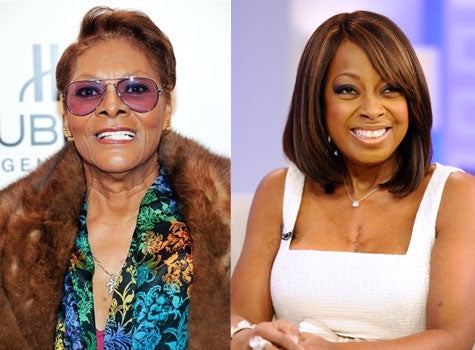 Episode two of “Celebrity Apprentice” was fabulous. However, it was a difficult week for the ladies as Dionne Warwick and Dionne Warwick continuously butted heads with project manager Lisa Rinna.

This week’s task was to create a children’s book and perform it in front of an audience of kids. The teams were judged on originality, presentation and age appropriateness. From start to finish, it was an exciting two hours of television. Check out three moments that kept us chuckling and glued to the TV…

La Toya, the Lion
For nearly a half an hour, Team ASAP deliberated and battled over the theme and direction of the children’s book they were creating. Lisa Rinna failed to delegate and lead the ladies — which we knew would be hard, given their personalities. After battling back and forth about whether or not the children’s book would take on a deaf theme from castmate Marlee Matlin, the team collectively decided Dionne Warwick’s idea of a lion developing the courage to be himself was best. La Toya Jackson was voted to be the lion and she made an impressive roar during the performance, complete with a blond mane. But it wasn’t enough to impress guest judge Holly Robinson Peete.

Star Steals the Show
During the process of putting together the book, Jones recognizes Rinna’s weakness as a leader and seemingly can’t help herself from taking control. Star steps up to the plate and writes the children’s book with the help of NeNe Leakes while the team goes out to finish gathering props for the show. When the group meets at the end to finalize plans, Jones brings up that she wants her name on the book which causes a dispute amongst the team. Warwick soon jumps into the fight and says she deserves credit too for coming up with the idea. SMH.

C’mon ladies, it’s a team effort — enough of the diva antics. Everyone surely participated in the project whether or not each idea was used. To see the ladies duke it out and not come to a concensus while the men sailed through the process was agonizing.

Boardroom Brawl
When it was all said and done, the ladies lost to team Backbone. Rinna dragged both Jones and Warwick to the boardroom for elimination. Mr. Trump pointed out that the main reasons the ladies failed at the challenge was because of the book’s idea not being original, thanks to Warwick, and the book not being age-appropriate, thanks to Jones. However, the fierce and bold Jones threw Rinna under the bus and let it be known that she didn’t do a good job as project manager. She explained that Rinna had lots to learn and “Celebrity Apprentice” wasn’t the place to learn those skills. Rinna was eliminated after Trump sided with Jones and Warwick.

One thing is apparent,after watching last night’s episode, the Black women on this show are tough! They’re about their business. The other ladies should beware and step up their game if they want to last. Go Star, Dionne, NeNe and Le Toya for a job well done — even though you lost the challenge.

We’re looking forward to next week’s episode where the teams go camping. Can’t picture these high maintenance women in the wilderness — but we’ll be tuning in with a bag of popcorn.

In your opinion, who should have been eliminated this week?