Bob Marley’s eldest daughter Cedella Marley is bringing a musical adaptation of her father’s famous song, “Three Little Birds,” to life. The new musical Bob Marley’s Three Little Birds—written by playwright Michael J. Bobbit and based on Cedella’s children’s book of the same name—opens at the New Victory Theater in New York today, a day after what would have been the reggae icon’s 69th birthday.

She chatted with ESSENCE.com about her father’s songs inspire children, and how her family celebrates his birthday each year.

ESSENCE.com: A Bob Marley musical for children seems like the perfect idea. Is this the first one ever?
Cedella Marley: Not that I’ve heard of one, unless some kids did a school play  or something. This is the first. It’s such an honor to be able to tell dad’s story for a younger audience. It’s a beautiful play. I think kids will love it. And some adults too.

ESSENCE.com: I’m excited to see it, and I’m in my 30s
Marley: Yeah,  because it’s vibrant and colorful. It tells the story of a shy boy named Ziggy who’d rather stay home and watch TV until his friends, and three little birds, encourage him to come out of his room and enjoy what the world has to offer. What’s cool is that we bring a little Jamaica on to the stage.

ESSENCE.com: Is the character based on your brother Ziggy Marley?
Marley: Not really. Ziggy wasn’t really shy as a kid. Mind you, the mother’s name in the play is Cedella. I didn’t go too far out of the family to name the characters. 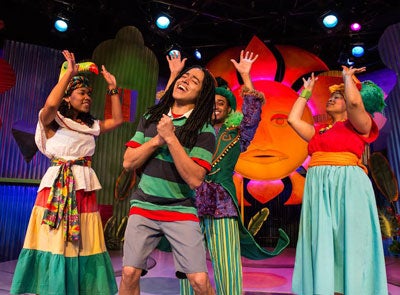 ESSENCE.com: So many children know your father’s songs. Is it safe to assume your children know like every song, every lyric?
Marley: [Laughs] No. I have an 18-year-old who loves country music. My 17-year-old thinks grandpa can do no wrong, and my 10-year-old loves Drake. We didn’t raise them saying, ‘Listen to your grandfather!’ ‘Cause, who does that? In general, I think kids love reggae music because there’s something soothing about it. It’s light and it’s airy. And dad’s music has a timeless message of hope and liberation and love. Even a 5-year-old can relate.

ESSENCE.com: Your father would have been celebrating his 69th birthday this year. How do you and your siblings celebrate each year?
Marley: We call each other and say ‘Happy birthday!’ We keep it simple and low-key. My mother is the one who goes all the way. She makes a cake shaped like a guitar. She really gets into it.

Bob Marley’s Three Little Birds, the musical, is playing at the New Victory Theater in New York City through February 23.