Singer Ricky Bell, of New Edition and Bell Biv DeVoe fame, has already had an incredible musical career that has spanned over three decades and spawned countless hit records, singles and legendary performances. Yet, there was still one thing he hadn’t done…until now! Bell has collaborated musically with his wife, singer Amy Correa Bell, for the first time.

On Valentine’s Day, Bell and his wife of 14 years, released their first duet—an acoustic love song called “Gold”. While fans are more familiar with Bell’s historic career and his battles with drug addiction, many know very little about the Bells’ triumphant love story and their unique bond.

The song pays tribute to the notoriously private couple’s own love story and devotion to each other, and sheds some light on the beauty of their marriage. In an effort to spread love and change, the Bells have promised 100-percent of the proceeds from the single’s sales will go to Direct Relief, a charity that provides life-saving medical aid to those affected by poverty and emergencies.

The video for “Gold (Acoustic)” dropped on March 1st and was produced by actress Meagan Good, and fans were in for a treat—the Bells starred in it together. One look at the video and it’s clear that their love runs deep, and that even after all of these years, their passion for each other remains. ESSENCE sat down with the happy couple to discuss their rarely told story, the challenges they faced while Bell battled his addictions and how making it to the other side has only made their love stronger.

This is the first time you guys are collaborating musically, even though you’ve been married for 14 years. Why now?

RB: We share a lot of the same musical taste—what we listen to when we’re driving, throughout the house, when we’re together. So, to come together and just put our creativity together, that part was pretty easy. The decision was made based off of our story together, our life together, and our marriage together, and sharing that story through song. I was listening to my wife’s EP that she was working on and I heard so much glow in the production, in her writing, in her performance. It was so amazing that I was inspired by it, and I said, “Wow babe! I want to be a part of this project. Let’s do a song together.” That’s how we came up with the song that we have now.

ACB: We definitely didn’t know it would be as impactful as it has been starting out. When I initially went to Ricky, I wanted his opinion, and for him to just give me like a critique on how I’m doing with my music. But I wasn’t expecting him to say he wanted to collaborate with me. When he did, I really took that as an honor. My producer and I were like we really respect Ricky and think he’s an incredible artist, and so, we really took that opportunity to study Ricky and be like, okay, everyone knows Ricky is Bell from Bell Biv Devoe, from New Edition. But, let’s show a side of Ricky that not everybody else gets to see. And there’s a lot about Ricky that people don’t know. His musical taste is part of what attracted me to him back in the days. He loves Ben Folds Five. He loves Sting, He loves, Ben Rector, and he loves Phil Collins. I was just so impressed with his musical taste. I hear him singing around the house, singing all these songs and I’m like, “Wow Dude! You sound amazing as an R&B singer, but has anybody ever heard that other style that you have?”

When the New Edition Story aired, ESSENCE did a story about the band members and their wives. People were really into it! What has that curiosity been like?

RB: Like, people are really into our relationships and our lives, our wives, and wanting to know them as people. It just makes you feel honored and appreciated that people are so much into you, not just as an artist, but you as a person. And for us, it has just kind of given us a freedom to let people see another side of us, to see the human side of us, to see the real life side of us. So, for us, man, if we can inspire anybody through our experiences and our journeys, we’re honored to do it.

Speaking of, what advice would you share with couple who are battling big obstacles in their marriage?

RB: Whether it was me battling with my addiction, or even some infidelity, we had to come together, we had to fight through it. And there’s comes a point when it’s really hard to keep things together. Everything’s in you is saying forget it. I can’t take this.  I don’t have the strength to deal with this, and I just want to give up and runaway, because I don’t know what to do and it’s hard to hear crying and fighting and sometimes you can’t even sit in the same room for a few minutes at a time. But, for us, back when we first fell in love, it was so great. We just promised each other, that breaking up is not an option, so whatever we have to do, whatever little bit of faith we can muster up, whatever trust that we can muster up – we do it. You just sit still, even when we don’t know what to do. And ask for help.  Seek help, through therapy, couple’s counseling, individual therapy…me with sponsorship. We just use all the information and faith that we have. I think that the biggest lesson that we’ve learned is to just ask for help when you need it and when you can’t figure it out on your own. If you don’t have the answer, then just, be like, man, we have egos. And it’s hard to put those egos aside and admit that you don’t know it all, and we actually need help on how to love better and listen better. For me, the biggest challenge was to just ask for help. And now that’s what we continue to do to this day.

ACB: We didn’t try to do it on our own. We took advice. We went and got therapy. We got couple’s therapy, individual therapy, went to church. So, I think when people just say try to keep it secret and pretend that everything is so good, or they give up too fast, they close the door to possibly making their relationship better than it was before. Because I will say, since all of our challenges, I think we’re more in love and united now than we’ve ever been. So, initially, it was really, really rough, but I feel like now that we’ve put in the work and we were like lets just trust and do everything they’re saying and just deal with it, and we’re actually starting to see the fruit of it now. 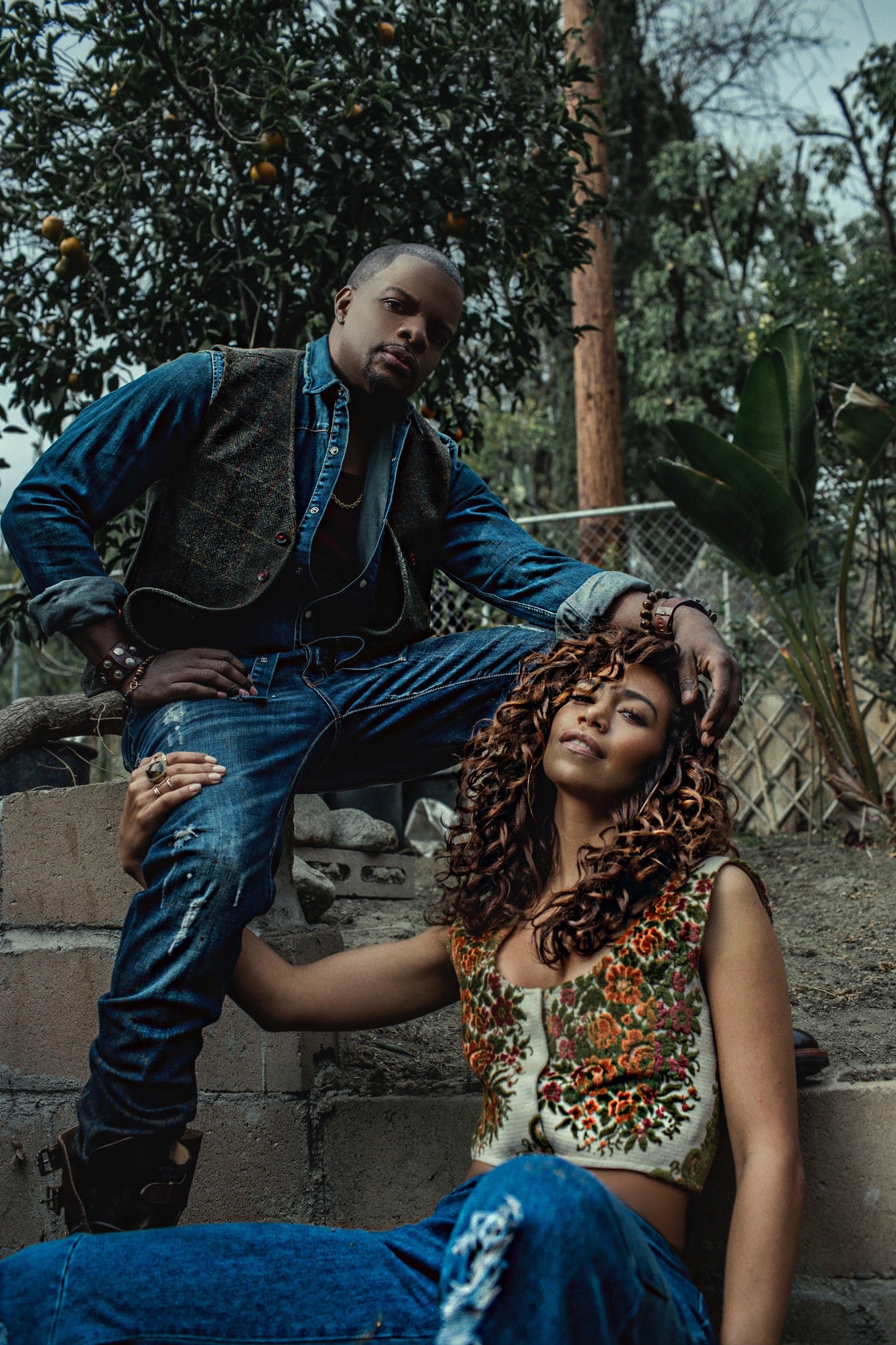 That’s a word. Stick it out!

ACB: Don’t give up when the shit hits the fan, because that’s what most people do. It’s like they get hurt and they can’t overcome it. They’re just so hurt, that they’re responding out of their hurt, but you have to look beyond the hurt and actually see why are you with this person…what’s your purpose together? For every couple that gets married there’s a reason why they chose each other. They’re not just lovers, they’re best friends and business partners and partners in crime in every sense of the word. They’re also spiritual partners too. Are we with each other to make each other better or are we with each other because we’re so perfect? You’re never going to meet someone that has it all together. Everyone’s going to have issues. But you just have to decide, are you going to be the person I decide to work stuff out with for the rest of my life or not? And I think we already decided a long time ago no matter what, we’re going to give it our best shot. We definitely leaned on help from God and godly people that are good examples to our lives.

It’s clear that you both take pride in the work you’ve done together and how it has only grown your marriage.

RB: Yes. Our marriage is our ministry, in a sense. So we come back, we are meant to share our experience and our knowledge. Inspiring, encouraging, give anything to any couples or just anybody that’s going through things. We ask ourselves, are we still an effective team? Are we still effective? Can we still make a difference? And as long as that’s a “yes”, then we will continue to fight.

I noticed that Meagan Good directed the video. She and her husband, DeVon Franklin is another example of a couple deeply rooted in faith. Do you surround yourselves with other like-minded couples?

ACB: Meagan and Devon too, and we have a couple other people Kev W and his wife. They were a couple that we met about eight years ago that really inspired us. Unfortunately, our friend’s wife passed away. But she actually prophesized to Ricky and I that we would do music together. And they really encouraged us when we were on the verge of breaking up to stay together. They were an example to us of what a supernatural power of the family looks like because they had three beautiful kids and they just were so in love and practicing the work of God. And it was so inspiring to us. It was like we saw them and we were like, wow, we want that! We want that for our future. And they definitely made an impact on us. I definitely think that God sends angels and people into your life that show you things if you’re open to it.