By clicking Sign Up, you agree to our Terms of Use and that you have read our Privacy Policy
Skip to content
Getty
By Paula Rogo · Updated October 23, 2020
Bette Midler is apologizing for a controversial tweet where she called women “the n-word of the world.“ The actress came under fire for her words on Thursday in the now-deleted tweet. Midler wrote, “Women are the n-word of the world. Raped, beaten, enslaved, married off, worked like dumb animals; denied education and inheritance; enduring the pain and danger of childbirth and life IN SILENCE for THOUSANDS of years They are the most disrespected creatures on earth.” 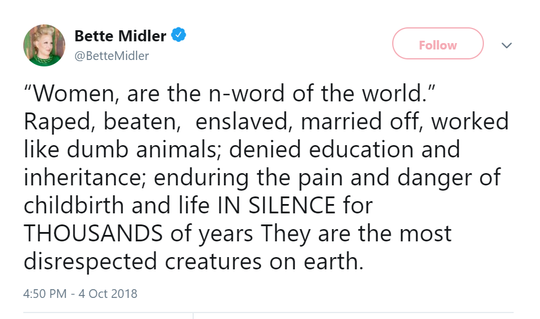 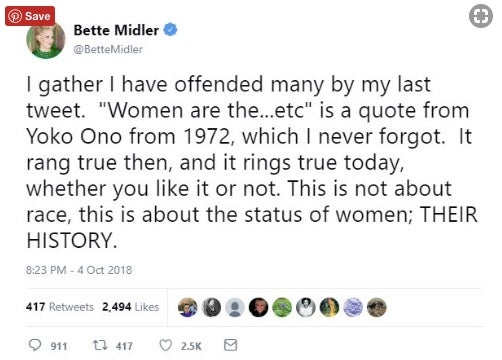 The controversial line paraphrases the title of a song, “Woman Is the ‘N’ of the World” written by John Lennon and Yoko Ono from their 1972 album Some Time in New York City. The Hocus Pocus star issued an apology hours later. “The too brief investigation of allegations against Kavanaugh infuriated me. Angrily I tweeted w/o thinking my choice of words would be enraging to black women who doubly suffer, both by being women and by being black,” she wrote Thursday night. “I am an ally and stand with you; always have. And I apologize.”

The too brief investigation of allegations against Kavanaugh infuriated me. Angrily I tweeted w/o thinking my choice of words would be enraging to black women who doubly suffer, both by being women and by being black. I am an ally and stand with you; always have. And I apologize.

Despite her apology, many were not here for her initial comments:

It sure is taking Bette Midler a long time to type "I shouldn't have said that." You'd think after hitting Peak White Feminism at breakneck speed, she'd be a littler quicker on the keyboard.

She deleted these but I don't want y'all to be lost if you got here late. 💅 pic.twitter.com/5JEnYhugls

So Bette Midler quoted Yoko who stole the line from Zora Neale Hurston who shed light on how the Black woman is the mule of the world in her novel.

But Yoko ignored that part.

And so did Bette.

So fuck both of them.

JUST A FRIENDLY REMINDER THAT IF YOU ARE A WHITE WOMAN YOU CANNOT ACCEPT BETTE MIDLER’S APOLOGY ON BEHALF OF BLACK WOMEN. OK THANKS.

The most irritating part of this Bette Midler shit is that she’s quoting Yoko who STOLE it from Zora Neale Hurston but not before ERASING Black from it. I’m tired. Ya’ll need to do better. #SincerelyKunta pic.twitter.com/vRXd5Jg2Nd