By Regina R. Robertson · Updated October 23, 2020
Iconic singer Aretha Franklin has died. She was 76. The Associated Press reports that a publicist for the Queen of Soul shared that Franklin died Thursday at her home in Detroit. She sang from a place deep inside, always. For that reason, we named her our Queen of Soul and for decades, she wore the crown – proudly. The fourth of five children, Aretha Louise Franklin was born in 1942, in Memphis, but Detroit was where she called home. The daughter of a Baptist preacher and a gospel singer, she grew up singing along with playing the piano and organ in her father’s church. Throughout her career, and whether she sang about love, life or for the Lord, you could hear, and feel, those roots planted firmly in the music. 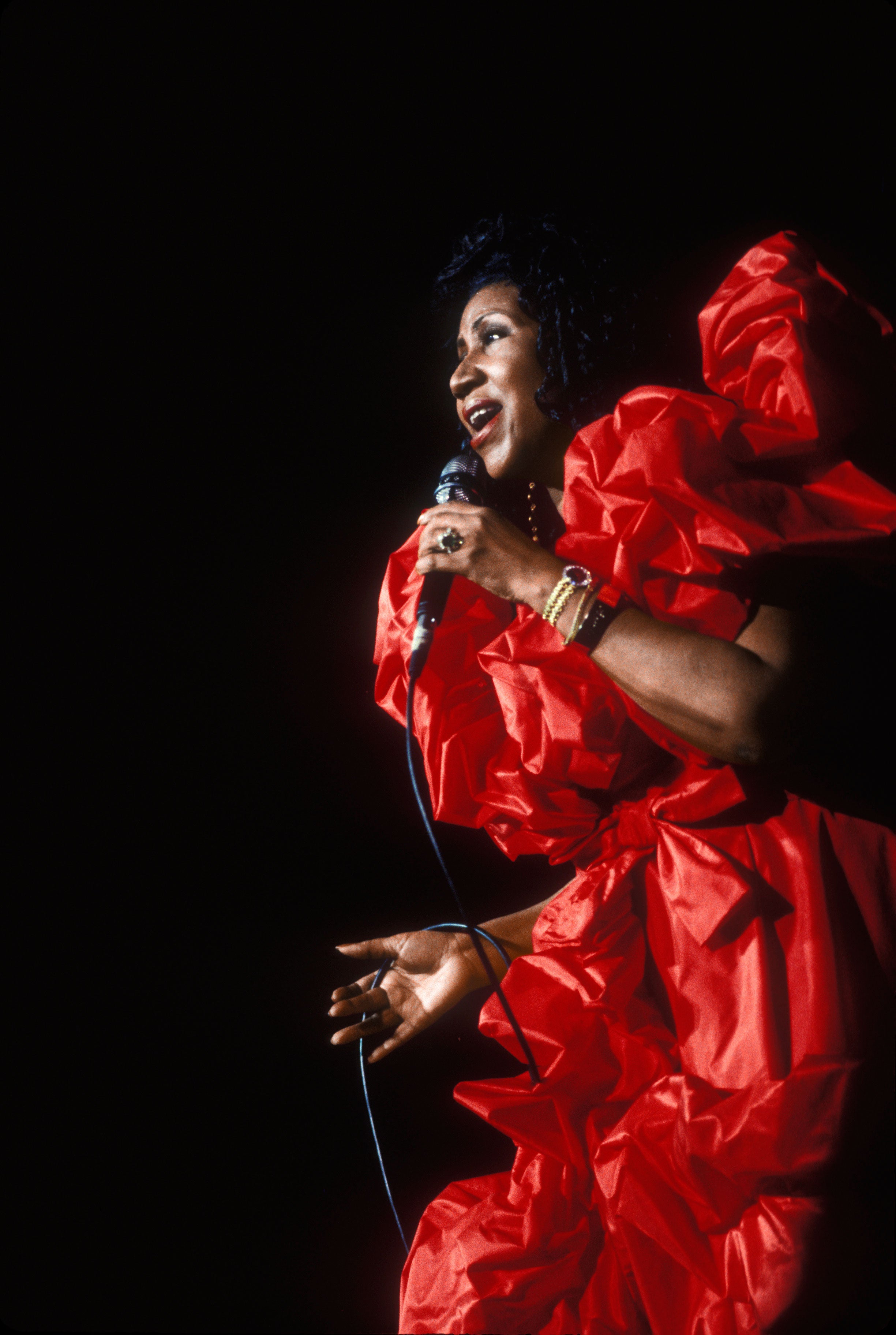 Franklin was just a teenager when she recorded her first album, Songs of Faith, in 1956. Five years later, after a move to New York to sign with Columbia Records, she released the album, Aretha. That was the only beginning. By the late 60s and with a label-switch to Atlantic Records, the hits started coming. First, there was “Do Right Woman, Do Right Man,” from the 1967 album, I Never Loved a Man the Way I Love You. The title track was a monster hit, too. Soon after, there was “Respect,” which not only became an anthem, but also topped the charts and earned Franklin the first two of her 18 Grammy Awards. As the years passed, the hits kept coming. Her catalog includes classics that continue to stand the test of time – from “Rock Steady,” “Chain of Fools,” “Day Dreaming” and “(You Make Me Feel Like) A Natural Woman,” to “Jump To It,” “Ain’t Nothing Like the Real Thing,” “Who’s Zooming Who?”, “I Knew You Were Waiting (For Me)” with George Michael…and on and on. And, of course, there’s the entire Sparkle soundtrack, which was as much a cultural phenomenon as the 1976 film itself. Then in 1980, she signed with Arista Records, which was her label home for over two decades. 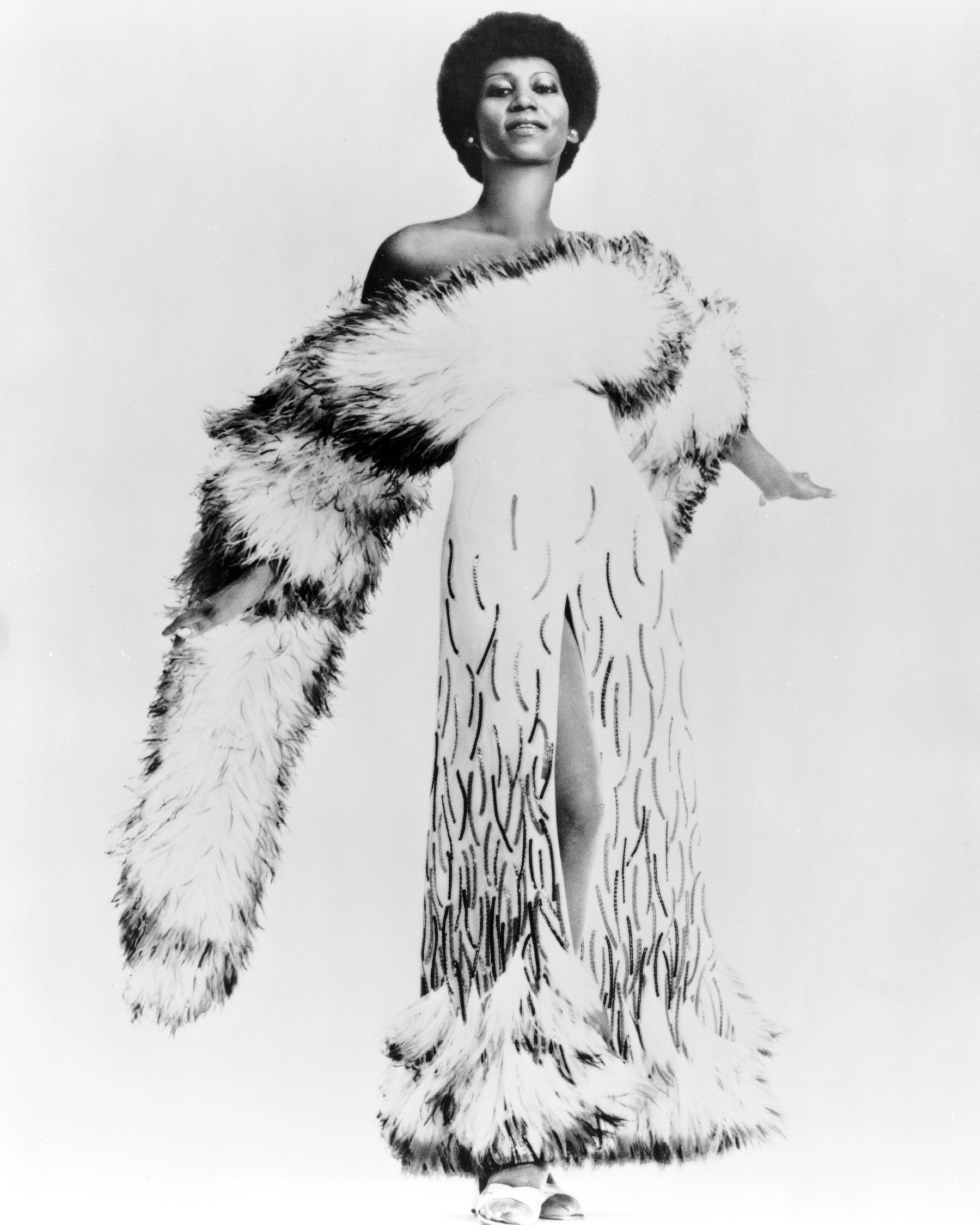 The Queen of Soul works a feather boa and dress in 1968.

Along her journey, there were high and lows, both personal and professional, but Franklin endured. Through young motherhood, marriages and divorces, to the inevitable ebbs and flows in popular music…yes, she endured. And she blessed us with song, always. She sang at the funerals of Martin Luther King, Jr. and gospel great, Mahalia Jackson, as well as for the inaugurations of Presidents Jimmy Carter, Bill Clinton and Barack Obama. In 2005, George W. Bush presented her with the prestigious Presidential Medal of Freedom. Along with going down in history as the first woman to be inducted into the Rock & Roll Hall of Fame, Franklin also sits atop Rolling Stone’s list of the greatest singers of all time. 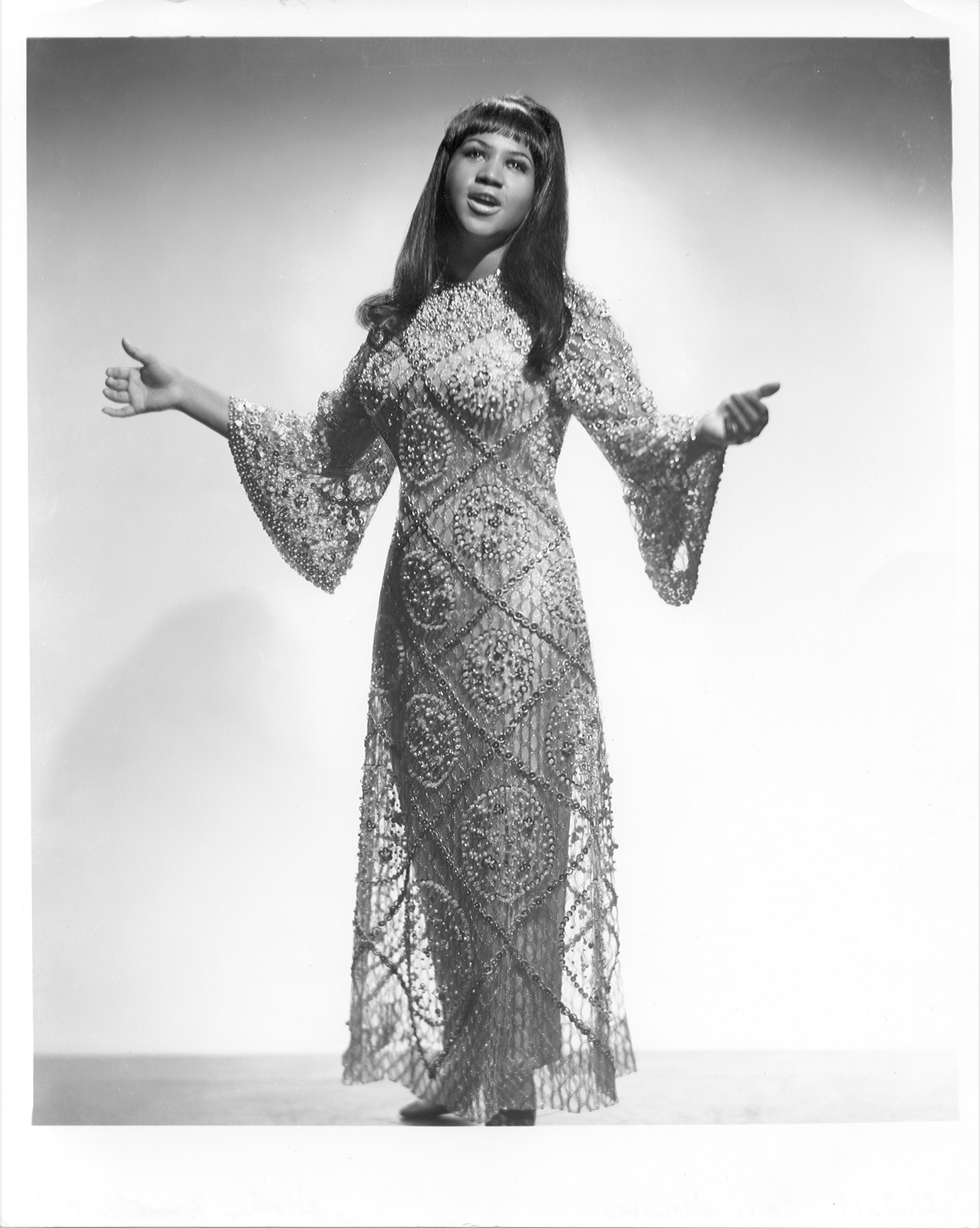 Aretha poses for a portrait in a stunning beaded gown in 1965.

The foundation she laid has served as a stepping stone for the many female vocalists who’ve followed her lead – from the late Whitney Houston, Mary J. Blige and Kelly Price to Faith Evans, Lauryn Hill (with whom she sang on the 1998 single, “A Rose Is Still a Rose”), and Jennifer Hudson, whom she hand-selected to portray her in a forthcoming biopic. Franklin’s last performance was in November 2017 when she took the stage at the Elton John AIDS Foundation 25th Anniversary Gala. At the top of this year, she announced her retirement from touring. The Queen of Soul did more than just supply the soundtrack of her generation and beyond. In fact, her music, her voice, was, and shall remain, woven into the tapestry of our culture. She was the gold standard and she’ll always be our Queen.
TOPICS:  Aretha Franklin