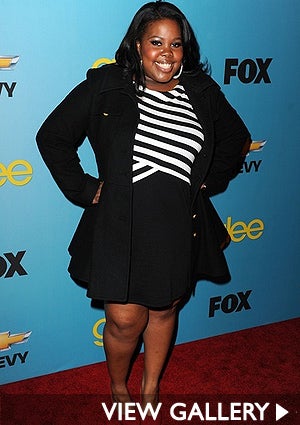 After a months-long hiatus, Amber Riley and the crew are back tonight for the return of “Glee.” We don’t know about you, but we can hardly wait to see, and hear, what she has in store this go ’round. Prior to making her presence felt on the ensemble show–now a Golden Globe and SAG Award-winning cult-favorite–she was a virtual unknown. Now, we can’t get enough of her. Along with her chill-inducing vocal talent, what we adore most about the bubbly, Los Angeles native is the easy confidence she exudes. Then, there’s the fact that she’s not only unafraid to show off her curves, but she happily embraces them. She represents us, well, and she’s clearly having the time of her life. Who could be mad? “My character is fun to play,” she says of the ever-fabulous, uber-talented Mercedes Jones. “I love the fact that I get to sing some of the most awesome, challenging songs and also, that Mercedes is really smart and outspoken. [Initially], my fear was, ‘I don’t want to be the stereotypical, big Black girl who’s always talking and never saying anything. Then, the creator of the show sat me down and said, ‘Your character was created to be a diva!'” There’s no doubt that Riley is perfectly-suited for the part and much to her delight, folks are really taking notice. “I’ve received a couple of fan letters from girls that have just made me cry,” she adds. “It’s like, ‘Wow, they really think I’m great and I’m just doing something that I love.’ It’s really an amazing feeling!” The hour-long, spring premiere of “Glee” airs tonight, beginning at 9:28pm, ET, on Fox. Read more: