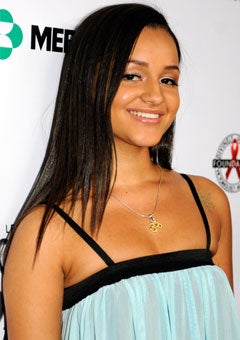 The day after she celebrated her 19th birthday, Alia Rose Brockert lost life’s biggest gift, a mother. The only daughter of R&B singer Teena Marie, Alia Rose, who discovered her mother’s body last December, has struggled to make sense of the legend’s sudden death.

But these days, the bi-racial beauty (her father hails from Barbados) is pulling her strength from God and her mom’s lessons. Courageously optimistic about her future, Alia isn’t focused on her own singing career, but rather her mother’s next album, which is due this summer. Just like Teena, Alia’s got a big heart… and soul.

ESSENCE.com: How are you coping since losing your mom?
ALIA ROSE: Honestly, I’m still figuring out how I feel about the situation. It was a reality thing at first. I could pretend my mom was on tour and she was coming back, but when I got to that two-month mark, I realized she wasn’t. So I had to start learning how to be alone and that’s when I got a little crazy for a second, but I’m doing alright because I’m one with God. And my mom always instilled a spiritual relationship and that’s what keeping me going right now.

ESSENCE.com: The month before your mother passed, she suffered with seizures. Do you know the cause of her death now?
ROSE: Yes, my mom had a seizure. That’s exactly what happened.

ESSENCE.com: You mentioned being alone. Do you stay with family now?
ROSE: Yes, I have some family on both sides. My mom actually built me a family. She was always the black sheep of her family, so the family I have around me isn’t necessarily blood, but that doesn’t matter. It’s about who really cares about you and who shows you the most love. I’ve learned from this situation that a lot of people in this world are snakes. You see a lot of true colors.

ESSENCE.com: After your mom’s death, did you get a lot of support from her celebrity friends?
ROSE: Of course. I had people reaching out to me from Apollonia to Beyonce. To hear from your heroes, people who you wanted to be like, and have their support, is incredible. They want to make sure I’m okay. It keeps you going to have that support.

ESSENCE.com: You’ve performed with your mom in the past. What was that like?
ROSE: The first time I hit the stage I was about seven or eight. We sang that Big Timers song {“Still Fly”} to “Ooo La La La.” That was really cute. I got all my experience from that. I gained control over an audience for the first time. When you obtain that and are comfortable, it’s the most amazing adrenaline rush you could possibly have.

ESSENCE.com: What do you miss most about your mom?
ROSE: Her voice. And she would pretend to be this bad ass Black kid named Baby Hattie that was Hattie McDaniel’s great-great granddaughter and give history lessons on Malcolm X and Martin Luther King. It was the funniest thing.

ESSENCE.com: Your mother and Rick James were close. Any memories of him?
ROSE: He had the craziest, funniest voice. He would say, “Come over here and give your uncle a kiss,” every time I saw him. He always wanted me to marry his son, Tazman. As a kid, I saw the craziest stuff over there at his house. It was all fun.

ESSENCE.com: What’s next for your music career?
ROSE: Right now I’m working on putting out her next project. She finished a whole album. I have two duets with her on this album and I’ve been doing background on her last three albums. I’m more focused on her right now. I’ve been creatively sparked like I’ve never been sparked before. Nobody is going to work for me anymore, so I have to work for myself now. I’m going to work! And I don’t know when I’m going to stop.