With four Olympic gold medals under her belt, Serena Williams makes winning championships look like a walk in the park. The 34-year-old world champion is not a stranger to the spotlight; we’ve been tracking —or stalking (depending on who you ask)— her career since she and her sister, Venus Williams shook up the tennis world with their (sisterly) Black girl magic at the 1998 Australian open. 18 years later, and Serena is the officially the highest paid female athlete, and she’s got a documentary airing on EPIX on June 22nd. The documentary premiered in New York City this week and Serena out-shined everyone on the star-studded red carpet draped in a thigh-baring gold gown, glowing skin and a seriously drool-worthy matte lip.

A ’90s classic, brown lipstick has made a comeback in the last few months, as stars and millennial have embraced the trend. And, while we love a good beauty throwback, anything that falls in the nude beauty category is often difficult for women of color to replicate, as nudes are often too chalky or too red. So when we spotted Serena Willliams’ gorgeous, perfectly nude lip color at the premiere of her self-titled documentary we did a double take. A perfect balance of sable, taupe and pink undertones, the lip color makes a statement without announcing itself. For fresh, summery appeal, a balm was used in the center of the lip to give a bit of a glow.

Obsessed with the look, too? Here are a few brown girl nudes you should try: 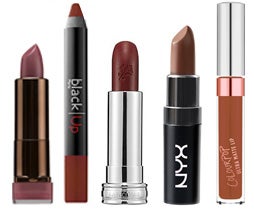