By clicking Sign Up, you agree to our Terms of Use and that you have read our Privacy Policy
Skip to content
@paintdatface/Instagram
By Samantha Callender · Updated October 26, 2020
A makeup page by the name of ‘Paintdatface’ felt the wrath of Black Twitter after posting an image of a white client that he transformed into a Black woman in the name of “cultural appreciation.” Turning the blonde hair, blue eyed, and pale skinned model into a turban-wearing, brown eyed, olive skinned Black woman, the MUA said he was coming from a “sincere place” when doing the makeover. He even anticipated his working being taken out of context, as he posted the image of the before and after with a lengthy disclaimer that went into detail about his vision for the look and how it somehow wasn’t about a race change. 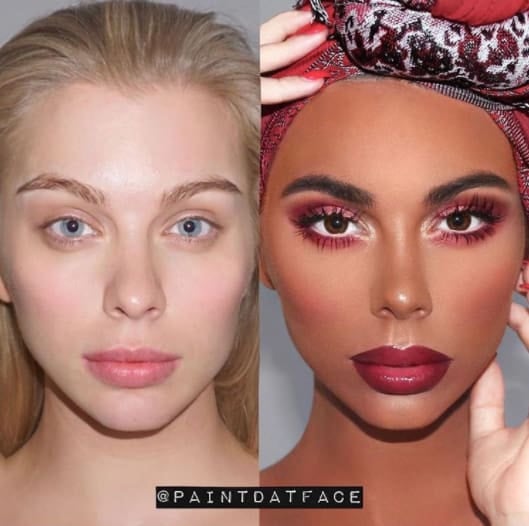 “This is a transformation that I’ve been holding back from releasing for a while now, solely because of the fear I’ve had of people turning it into a racial scandal against me,” he wrote. “THIS IS NOT ABOUT A RACE CHANGE. This is about one woman acknowledging, embracing, and celebrating the beauty of another woman’s culture. I believe we live in a society nowadays that seeks any reason to stomp around town with a picket stick in their hand, fighting ABOUT something, rather than FOR something (and yes, there is a difference!).” Most on social media did not receive it as “art,” but rather, another method through which culture and style has been appropriated. Time and time again, Black women have expressed how offensive it is when non-PoC imitate our hair, clothing or features as a costume that can be taken off when it’s no longer convenient or trendy. Subscribe to our daily newsletter for the latest in hair, beauty, style and celebrity news. Although they have since deleted the post, Twitter users still managed to grab screenshots and express their disappointment in yet another tone deaf beauty transformation.

this is honestly so disgusting. pic.twitter.com/DOM57CGub1

In the end, most were left wondering why a makeup artist would use a white woman to celebrate Black culture in the first place:     We’re scratching our heads, too.