This article originally appeared on xojane.com.

“Oh, I can’t have laser hair removal; you know those lasers are racist.” That was my running joke for roughly the past decade, having sought out the treatment for removal of unwanted body hair and being denied by multiple purveyors on both coasts. In the most incredibly simplified terms, LHR works by targeting the darker pigment of the hair follicles, so the best candidates have pale skin and visible hair. If the entire canvas (meaning skin) being worked upon is darkly pigmented, the laser could potentially just zap away willy-nilly and burn the canvas.

Once that was explained to me, I chalked it up to life not being fair and went on with all manner of alternate hair removal methods. However, understanding that every industry will see change and hopefully improvement, I’d try again every year or so, with no luck.

The experience of having sought out this service for years, having the money to pay for it, and even having connections within the industry, yet being told “no” time and again, was well beyond frustrating and into maddening territory. I admit that my excitement today shows I might have missed the memo that others have gotten sooner about advancements in laser hair removal for darker skin, but my efforts just were not fruitful.

After even my LHR requests of skilled technicians that I also had a friendly connection to, people who would have more at stake in not wanting to burn me than if I were just client X walking in off the street, were met with a cheerful smile that couldn’t quite mask their trepidation and a, “Sure, we can try…” I decided to walk away for good.

As much as I enjoy alliteration, I’m aware of multiple lasered labia lawsuits over burned lady bits that terrified me. Also, my skin scars so badly that any mishaps would leave a permanent reminder, so even those brave LHR techs who wanted to try had extra reason to pump the brakes.

First of all, if we can step back out of the bubble of my concerns about hair removal, I need to state clearly that LHR’s skin color prohibitions are not actual racism, systemic hatred that fuels murderous police brutality in our country, or other deadly manifestations of racial bias; I’m not saying they are. They’re just science.

However, whether it’s the hair on our heads or down below, we’re often told “no” where others hear “YES,” and it wears on the spirit. Like microagressions and lack of representation in entertainment, things like walking past a laser hair removal salon roughly every few blocks in the city where You Can Have Anything (and 24 hours to boot), but being refused again and again because of the color of your skin is a little thing with a big impact. It’s one of Andy Dufresne’s rock hammers that eventually broke through prison walls. No matter how insignificant something may seem, it can do great damage over time, even in tiny, barely perceptible increments.

Still, I’d survive, right? After dealing with ingrown hairs and razor bumps, and finally eradicating them with an extensive regimen of diligent, quality waxes and a cocktail of multiple products that I applied two or three times a day, all it took was one rushed Brazilian wax at a new place to send me back to Ingrowns Hell.

I thought angrily about that laser hair removal (I thought) I could never have and tried to wipe away that fury as I set about treating the ingrowns, including trips to the dermatologist for cortisone injections.

On one of the days when my frustration was at its highest, I got a Groupon alert about something unrelated and when I opened the app, there it was: unlimited laser hair removal for a year, at a great price. I’m not a regular Groupon-er, but I started hoping again. I called the facility, Step Up Skin Laser, and the sweet receptionist bore with me as I described my skin color and grilled her about the lasers and staff at the facility.

She confidently said it would be fine, so I bought the Groupon while on the phone with her, figuring I might just be buying myself a lesson in letting something go once and for all, but prepared to take that loss at that price. The lovely receptionist scheduled the appointment and told me I’d have to shave beforehand. I knew from my many efforts to get LHR in the past that this would be part of the deal, but it really hit home right now.

I hadn’t shaved my undercarriage in….a decade, maybe? For women who don’t deal with ingrowns, I imagine a quick shave in the shower to be a simple and inexpensive answer, but for me it’s not an option. But here I was, currently in the midst of ingrown treatment at the highest level due to that terrible wax, so what did I have to lose?

One of the great frustrations of the dark skin/laser hair removal conundrum is that dark skin + coarse, curly hair = MUCH higher risk of ingrown hairs, which laser hair removal can help with immensely… IF we can have access to the treatment. The #AllLivesMatter crew might try to point out that extremely fair-skinned people with very light, fine hair are ALSO not good candidates for laser hair removal, (because the laser needs pigment to zap), and while that is true, those people are also not generally predisposed to ingrown hairs, and excess hair growth is less likely to be as visible, or even visible at all.

It might still bother them, though. I could never tell someone else what does or does not bother them based on visual observation; that’s preposterous.

If their body hair bothers them, they have just as much of a right to do whatever they want to try and remove it as anyone else, just like anyone has any right to leave their body hair alone if it DOESN’T bother them. Not only do I not make a practice of telling people how to feel or what to do about their own bodies, but I don’t want my escapades in hair removal to read as an overall statement that all body hair on women is “bad” or “dirty,” etc.

I stood up and cheered when I read Balpreet Kaur’s response to public mocking of her facial hair, which she does not alter, just like I did for Britta Gregor, who does. And farther south on the body, Emily shut down the question of whether we forward-thinking feminists “should” remove pubic hair right here with many great statements, culminating in “Do what you want with your pussy.”

Rock your full bush/’stache/hairy legs if you wanna/ I’m just spreading the word that we Negresses can get safely and consistently lasered now too; in fact, it seems I’m a little late to this party, so I’m gonna shout it from the proverbial rooftops.

Also, I have PCOS, and, for me, doing something about the hirsutism (mild in my case, but still there) that comes with it helps me take back just a bit of power from a condition that takes away from me.

So I went to get zapped.

Nervous, I met with the manager of Step Up Skin Laser, a really beautiful woman named Kelli who reaffirmed in person that I was actually a great candidate, and I need to state that she and the entire staff showed no signs of the industry-wide Groupon hate that I actually understand and feel kinda bad about.

Her “don’t be scared…” speech was geared more toward first-timers who are nervous about the pain. I have a high threshold for pain; I was just nervous that I’d be getting the “well you know we can’t really use the laser on your skin as we would normally, so we’ll just be setting it at low and crossing our fingers…” speech I’d heard before, but when she described the laser to me, and that my skin tone could be treated with it, full stop, with no asterisk or warning beyond that of anyone about to have their softest lips zapped with a laser, I felt genuine relief.

The relief upon entering the room was great. The professionalism, swiftness, and lack of pain during my actual treatment then enhanced the greatness of the experience. Apparently those technological innovations I had hoped for have been made manifest in a new type of laser, the Soprano Ice, which is what Step Up Skin Laser used on me.

It wasn’t 100 percent pain-free, exactly, but I hadn’t used any numbing agent at all, and to be honest, I’d be worried if it was 100 percent pain-free — it’s a laser on your yumyum. It was, however, nothing more than a tiny stinging feeling for just a second here and there, a totally appropriate momentary discomfort. 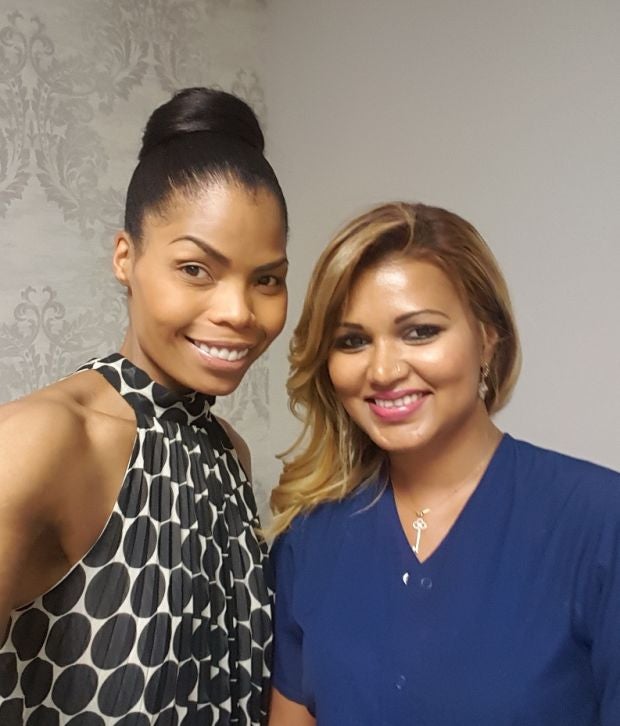 So that was all well and good, and I strutted out of that salon feeling like a queen, reveling in my extraordinary ordinariness — I had finally done this thing that I had wanted for so long, that so many other people have had access to for years. I looked at other people on the street, wondering if they’d had it done too, scanning the faces of strangers of all colors and wondering if we were now sisters in the same bizarre league.

But the real proof is in my now almost-hairless puddin’. I’m not nearly finished with my full course of laser treatment, and I expected it to be such a problem that I might need to use the full year I purchased, but I’m (pleasantly) shocked at how little hair grew back after even just my first session.

And the ingrowns are gone. Just…gone. I’m getting emotional even typing those words. I can’t believe that after all these years I’m having laser hair removal and it’s working. It’s simple, it’s easy, and I can’t believe it myself, but that terrible wax just might end up being my last wax ever. Hallelujah!