My natural eyebrows are sparse, short and practically non-existent.

I’ve spent the majority of my twenties experimenting with different ways to fill them and with each method came a completely different result.

Most makeup artists will tell you that the eyebrows should look like sisters instead of twins. Mine look like distant relatives. So, you can imagine how excited (and relieved) I was to finally experience microblading.

For those who have no idea what the procedure actually is, think of it as semi-permanent tattooing. Using a set of teeny blades on a microblading pen, an expert will use the tool to create hair-like strokes and help plant pigment under the skin, resulting in a practically perfect shape that remains intact for 1-3 years.

After fully grasping this concept, it took no time for me to schedule an appointment with Kendra Bray, Founder and Owner of Better Brows NYC.

For starters, I won’t deny my trepidation. As someone who has never had her eyebrows tweezed or waxed, the idea of teeny tiny blades puncturing my face made me squeamish. However, Bray put me at ease long before the actual procedure began.

Prior to my appointment, she requested that I send a picture of my natural brows so that she could have a better idea of what she’s working with. Once I arrived, we spent some time talking about what my dream eyebrows look like. I’ve never been too particular, so I only requested that they would extend past the edge of my eyes and appear fuller.

From there, she spent a couple of minutes mapping out the shape of each brow with a pen. Once we decided on a final look, Bray applied numbing cream (for pain relief) to both brows and allowed it to set for 30 minutes. And then the real fun began.

Using the microblading tool and custom pigment color, Bray created the hair-like lines throughout the brow shape she created moments before. And after some back and forth between each one, my dream eyebrows were finally a reality.

Now, although the initial procedure doesn’t take long, aftercare is what will really make or break your new look.

“Think of your brows as the opposite of everything else you do for your skin,” says Bray. “We’re constantly wanting skin cells to regenerate because it’s that new, young, glowy skin we want to see. But with brows, we’re essentially staining that skin and want those cells to turn over at a slower rate.”

First, be sure to keep your tattoo dry for 10 days following the procedure. This means taking extra care while washing your face and keeping cleansers, lotions and ointments away from the brow area. The skin under your eyebrows may also start to feel itchy and tight after day 10, in which case you can apply a very small amount of coconut oil.

Additionally, you can expect to appear darker in color immediately after the procedure, which is totally normal. Over the course of the entire healing process–about 6-8 weeks–that darker pigment will fade and the skin will become softer.

Bray also notes that scabbing is routine and “it won’t be that noticeable. Most people won’t even be able to tell what’s going on unless you tell them and they’re staring at your face. Once the scabs are off, you may notive a little shine to the skin. That’s just the fresh new skin regenerating underneath and it goes away after a couple days.”

Although it’s been just one day since I got microbladed, I’m already obsessed with the results and can’t stop looking in the mirror. Seriously, check out my before and after: 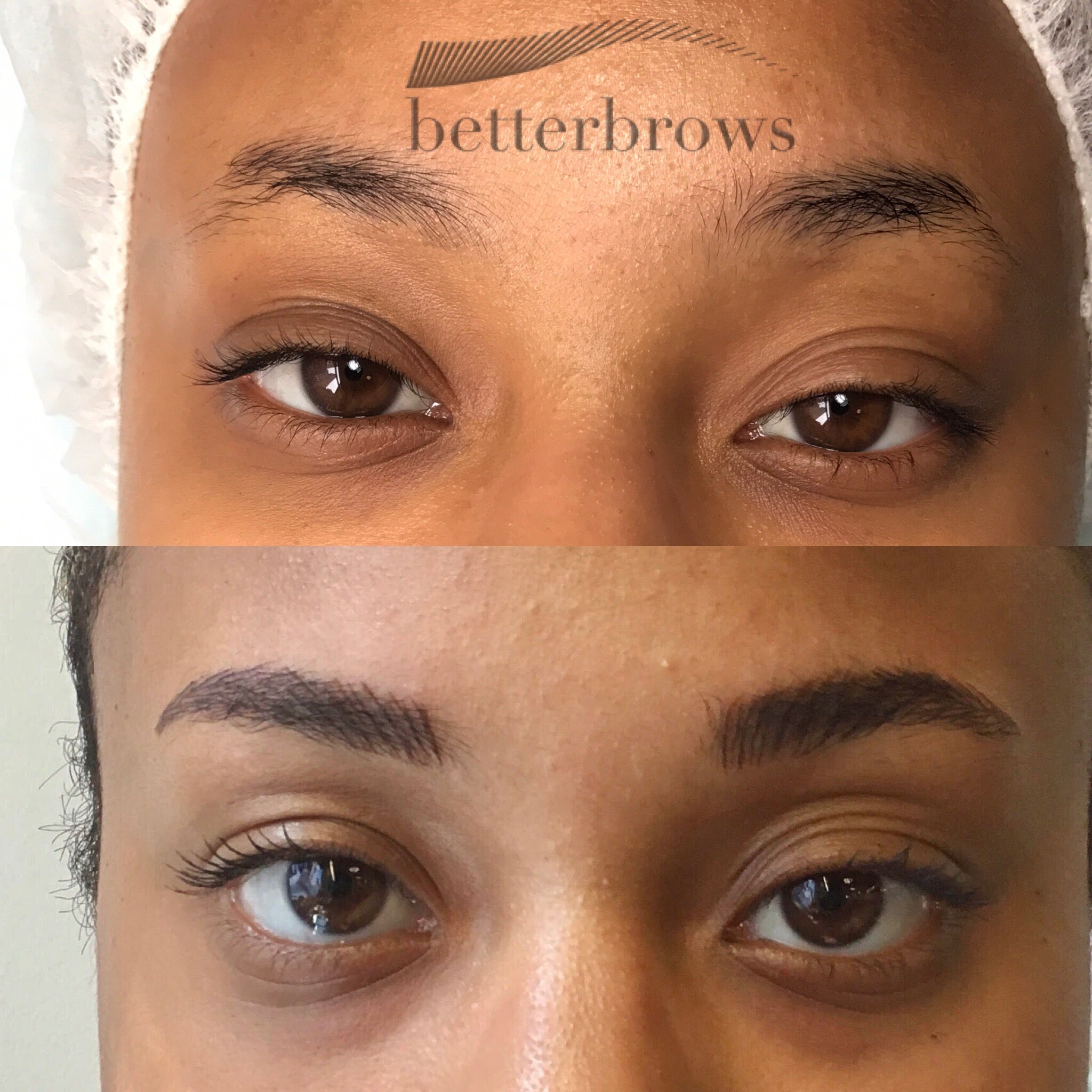 Perhaps the biggest takeaway from this experience is the widespread assumption that only those with sparse brows need this type of work done.

Bray adds, “A lot of people think, ‘oh, I have brow hair. I don’t need microblading.’ One of the benefits of microblading is that after you’re done, you have such a precise, perfect shape, that’s it’s actually easy to groom on your own at home.”

Still curious about the cost, after-care and how exactly to find a microblading expert? Press play to learn more in our latest Facebook Live segment and schedule your own appointment with Better Brows NYC. It’s officially ESSENCE-approved!