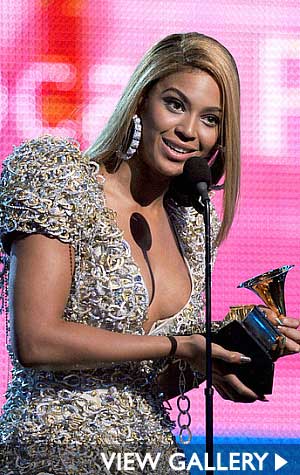 We sure hope Beyonce made room on her trophy shelf. The artist known as Sasha Fierce was a winner from the start at the 52nd Annual Grammy Awards. In fact, her songwriting team had to scoop up her Song of the Year award for her monster hit, “Single Ladies (Put a Ring on It)” as she was backstage getting prepped for her show-stopping, wind-machine-fueled performance of “If I Were a Boy,” with a dash of Alanis Morissette’s “You Outta Know.” Though we knew she’d clean up last night (she won six!), Beyonce still managed to surprise us when she not only acknowledged, but also expressed her love for her husband, Jay-Z, during her acceptance speech for winning Best Female Pop Vocal Performance for “Halo.” There truly is a first time for everything. Speaking of first times, Maxwell is now a Grammy winner, times two. After a near-decade away from the spotlight, the balladeer made all of us swoon, once again, with the release of his latest album, “Blacksummers’ Night” and won awards for Best Male R&B Vocal Performance (“Pretty Wings”) and Best R&B Album. And how about that performance with Roberta Flack? When asked if we’ll have to wait another eight years for another masterpiece, he smiled, slyly, and said, “Never again! I’m just happy to have had the chance to make good music again. I’m going to be all up in your face from now on.” We like the sound of that. Another winner last night was Jamie Foxx, who took home his first Grammy for Best R&B Performance by a Duo or Group with T-Pain, for “Blame It.” By the time he hit the stage to perform his infectious hit, Foxx was on fire! He welcomed T-Pain to the stage, of course, and surprised us all with a special appearance by Doug E. Fresh. Then Slash joined in to rock out and took the song to the next level. Even Jay-Z – who later swooped up trophies for Best Rap Solo Performance (“D.O.A.”), Best Rap Collaboration and Best Rap Song (“Run This Town”)–was nodding his head. And no, you’re eyes weren’t deceiving you…Jamie sure did break out with the Running Man. More on that later, in a separate post! India.Arie was a winner, too, for Best Urban/Alternative Performance (“Pearls”) as were Mary Mary for Best Gospel Song (“God in Me”). Mary J. Blige’s performance of “Bride Over Troubled Water” with Andrea Bocelli was not only heartfelt, it will also benefit the earthquake victims in Haiti. The audio and video versions of their performance are available for purchase at iTunes, with all proceeds being donated to the Red Cross. Double nominee, Drake, closed out the show and lit up the stage alongside Lil’ Wayne and Eminem, who ripped through his verses with expert precision, while Blink 182’s Travis Barker did his thing on the drums. And though Michael Jackson is gone, we were blessed to witness a riveting, 3-D tribute to the King of Pop, courtesy of Jennifer Hudson, Smokey Robinson, Usher, Celine Dion and Carrie Underwood, who sang “Earth Song.” After the group’s performance, Michael’s two eldest children, Prince and Paris, along with their cousins, took the stage and silenced the audience as they accepted the Lifetime Achievement Award in honor of the man they knew simply as, “Daddy.” Michael, you are truly missed. Read more: