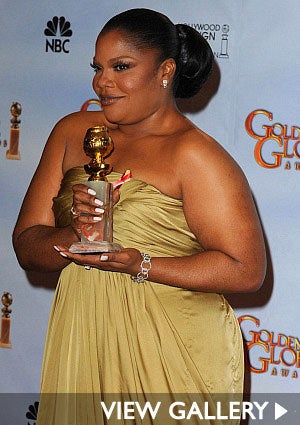 Though the late afternoon rains put a slight damper on the red carpet, spirits remained high at the 67th Golden Globe Awards last night. The show, which aired live from the International Ballroom of the Beverly Hills Hotel, kicked off quite fabulously, especially for Mo’Nique.

As we’d all predicted (and hoped for), first-time nominee, Mo’Nique, earned Best Supporting Actress honors for her role in “Precious: Based on the Novel ‘Push’ by Sapphire.” Dressed in a gold, sleeveless gown, the actress took to the stage and delivered a powerful, though unprepared speech. “Everybody kept asking me [if I knew] my speech and I said, ‘No, I don’t know what I’m going to say because I don’t want people to think I just knew I won something,'” she said, with a laugh. She went on to acknowledge her husband, her co-star and Best Actress nominee, Gabourey Sidibe, and give praise to the film’s director, Lee Daniels, for his courage and vision to bring the powerful story of abuse and redemption to the masses. “Oftentimes, we live a lifetime with those demons and don’t really deal with them,” she added during her backstage interview following her win. “We continue to have a damaged life and it’s time to stop that. It’s time for us to heal and be survivors and no longer be victims.”

Rounding out the night’s winners were Zoe Saldana, CCH Pounder, Laz Alonso and the cast of “Avatar,” which won for Best Motion Picture, Drama, as well as newcomer, Amber Riley, and her crew from television’s latest cult-favorite, “Glee,” the winner for Best Television Series, Comedy or Musical. And in a prime example of the power of reinvention, Mike Tyson was awarded a Golden Globe alongside his castmates from “Hangover,” which won for Best Motion Picture, Comedy or Drama. During a backstage interview, the heavyweight champion spoke candidly about what he gained by being a part of the film. “I had no idea it would be [of] this magnitude,” he began. “Before I did this movie, I was doing all kinds of drugs and [feeling] real dark. [Doing this movie] gave me a new lease on life and started me over. It got me on a good path to a healthy life.”

Among the night’s guest list were nominees Tracy Morgan, Chiwetel Ejiofor and Leona Lewis, Mariah Carey and hubby, Nick Cannon, Samuel L. Jackson, Halle Berry (stunning!) as well as Alfre Woodard, whose daughter, Mavis Spencer, was on-hand as Miss Golden Globe.  As usual with award shows, fashion was a huge talking point (be sure to take a peek at our gallery), but even as Hollywood’s elite posed in their to-the-floor gowns and designer tuxes, many people had Haiti on their minds. In fact, nearly everyone wore a red ribbon–trimmed in gold and blue–to acknowledge the earthquake victims and further stress the importance of donating to the ongoing relief effort. Very classy.

Now that award season is in full-swing, be sure to check in this week for coverage of the Screen Actors Guild Awards on Saturday.
For a peek at the menu served to all attendees this evening, click here.