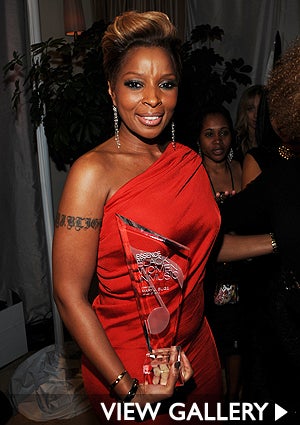 The night belonged to nine-time Grammy Award winner, Mary J. Blige, our esteemed guest of honor at the Essence Black Women in Music celebration in Hollywood. The Sunset Tower Hotel was the place to be on Wednesday as Blige accepted the inaugural Essence Black Women in Music Award.  Much to her surprise, Island/Def Jam Chairman, L.A. Reid, was on-hand to present her with her statue before a star-studded, standing-room-only crowd including the likes of Raphael Saadiq, Melanie Fiona, Ledisi and Ludacris along with Taraji P. Henson, Joy Bryant, Gabrielle Union and Jurnee Smollett. Selecting the Queen of Hip-Hop Soul as our first honoree was a no-brainer as her accomplishments as a singer, songwriter and actress speak for themselves.  Then, of course, are her entrepreneurial efforts as well as her philanthropic work, which includes her role as co-founder of the non-profit organization, Foundation for the Advancement of Women Now (www.ffawn.org). “Thank you so much for supporting me from the day I stepped foot into the music industry,” Blige said to the crowd. In the 18 years since she dropped her debut album, it’s clear that she’s very aware of how far she’s traveled. “It really means something to me to have Maya Angelou speak on my behalf,” she noted after viewing Angelou’s segment of a special, video presentation. “It also means a lot to have Oprah on my speed dial!” The Black Women in Music celebration was the first, of many, events planned in Hollywood to kick off Grammy week.  And speaking of the Grammys, be sure to tune in to the 52nd Annual Grammy Awards on Sunday night as Blige is set to join Andrea Bocelli for a special performance of “Bridge Over Troubled Water.”  The audio and video versions of their performance will be available for download at iTunes.  All proceeds will go to the American Red Cross to benefit the ongoing earthquake relief effort in Haiti. Read More:
Loading the player...