As she racks up one notable role after another, The Harder They Fall actress is chasing excellence not fame.

When Stagecoach Mary first appears in the all-Black Western The Harder They Fall, she calmly makes her way onto the stage of her saloon, building the audiences anticipation of her performance with every boom of her shotgun as she pounds it against the hardwood floor while sauntering through the crowd. The scene invokes an eagerness not unlike that felt by fans of Zazie Beetz—who plays the singing outlaw in the Netflix original film—whenever her name is attached to a project. An air of excitement lingers around her capabilities on-screen, as she has established a reputation for embodying the essence of every character she portrays. It’s the reason director Jeymes Samuel made Beetz an offer for the role of Stagecoach Mary right out of the gate.

I questioned,
had I earned my place yet? Was I just lucky? That was very torturous for me for a long time.”

“I wasn't looking for physical likenesses,” Samuel says of his casting choice. “What I was looking for was swagger with this particular story— pure swagger and style.”

Those words aptly describe Beetz, 30, who is as known for her loosely structured textured hairstyles and natural makeup as she is for playing the likes of Domino in Deadpool 2 and Van in the FX series Atlanta. The Golden Globe–winning comedy-drama by Donald Glover jump-started both her Hollywood career and that of The Harder They Fall costar LaKeith Stanfield. She admits, “None of us expected what happened with Atlanta to happen.”

In 2018, Beetz received an Emmy nomination for Outstanding Supporting Actress in a Comedy Series for her role as Earn's on-again, off-again girlfriend just four years after she decided to pursue acting seriously. Though she was a part of the theater community at Skidmore College, where she took drama classes and performed in plays, Beetz majored in French at the liberal arts school. “After I graduated, I was like, I've spent so much time acting. I can't not try it,” she says. “I think after high school, I was like, I can't get trapped in this. What are my other things? And then I had an opportunity to see those other things—and I chose acting again.”

Being accepted by the entertainment industry so quickly came as a bit of a shock to Beetz, who landed a supporting part in Joker in 2019. The psychological thriller became the sixth-highest-grossing film of that year and the first R-rated movie to bring in more than $1 billion at the box office. She says of the rise of her profile, “It was an adjustment in terms of what I felt I deserved and what I earned. I questioned whether I had earned my place yet. Was I just lucky? That was very torturous for me for a long time.” 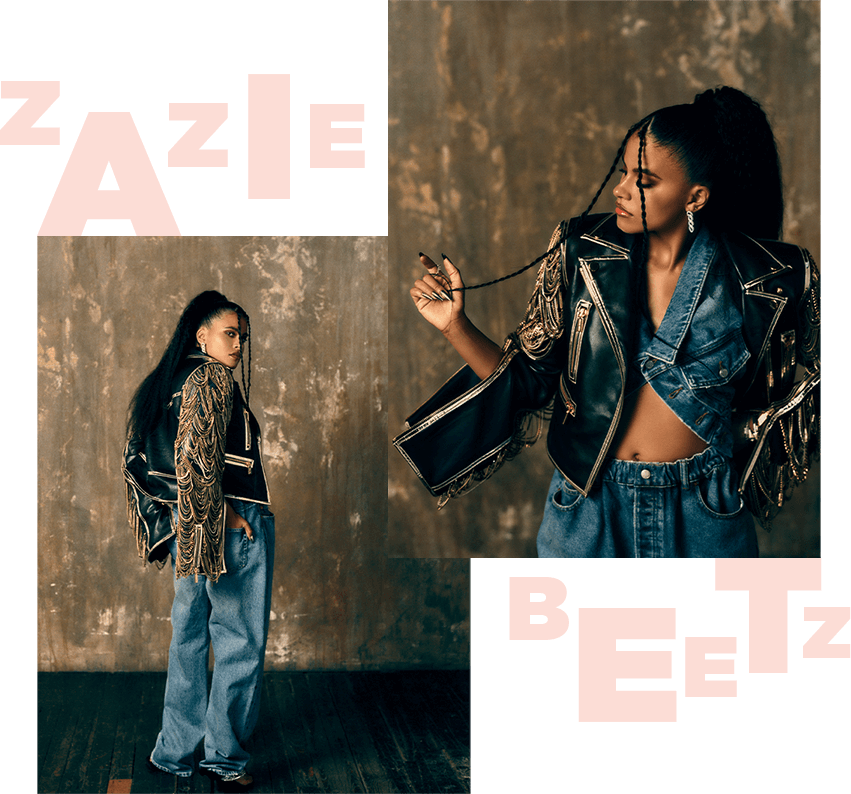 Sometimes I wonder am I continuing down the path of no return, like would I want more? Would I not want more? But I'm speaking about it in terms of fame rather than artistry.”

Becoming a public figure brought its own share of concerns for Beetz and her partner, fellow actor David Rysdahl. “It was tough for him to adjust to what was safe and what was not,” she reveals. Beyond considerations of physical protection came ones of an emotional nature, as Beetz wondered what her increasing fame would mean for her personal relationships. “People get feelings about it and expectations of you changing: Are you going to change? Are you not going to change? Do you see me the same way? Do you not? I was very aware of wanting to remain true to who I was. At this point, certain things have kind of remained the same.”

Beetz takes solace in that continuity in a way that others in her position might not. In an industry with a reputation for only allowing stars 15 minutes of fame, when asked whether she feels she's "arrived" as many have suggested, she ponders what it even means to achieve notoriety in 2021. “The amount of people that are famous nowadays is so much more than 10 or 20 years ago, and there's a much larger sort of gray space in terms of mid-fame, mid-level and B-list celebrity versus A-list celebrity,” she says mulling over the idea of whether she feels as though she has arrived. “Sometimes I wonder, Am I continuing down the path of no return? Like, would I want more? Would I not want more? But I'm speaking about it in terms of fame rather than artistry.” Taking a beat, she retorts, “What is arrival? I don't really know, but I think there's a lot more I want to do.”

Working alongside Regina King in The Harder They Fall checks one thing off Beetz’s bucket list. On-screen the two play archrivals but in real life the veteran entertainer has become a mentor of sorts to Beetz. “She's somebody I've respected for so many years. She's been working for so long and is an example of a woman really taking charge of this industry, making it her own. And now with her directing and going into production and making her own content, I just really respect it,” she says. “I was very excited to work with her.”

Beetz’s admiration for King’s professional path foreshadows her own desire to take the reins behind the scenes to “really guide something from the beginning,” she shares. “I'm interested in that experience, which is really telling stories rather than waiting around for a story—creating content that I'm genuinely interested in.”

With a bevy of strong ensemble roles on her résumé, Beetz is also looking forward to carrying a project on her own one day, despite fears about what that entails. “It's different to be a lead. It's a different responsibility and it’s so much more intense,” she says. “I still worry if I have the ability to do that charismatically, to do that in terms of stamina, to do that in terms of my insecurity with my work and having greater influence over the story and everything. I don't feel like I've done that yet.”

Stanfield, who recognizes his longtime costar’s progression as an actress, has no reservations about Beetz’s ability to excel as a leading lady. “Her growth is due to her unending curiosity and bravery in the face of what can, at times, be a very scary business and workspace,” he says. “Her talent and skill always inspire me to be better. She’s truly a gift.”

Shooting her latest film and season three of Atlanta during the COVID-19 pandemic spawned a different type of maturation in Beetz, who describes herself as an introvert. Likening walking on a new set to arriving for the first day of school, she says fostering relationships with cast and crew members during the past year has deepened her appreciation of community and sparked a desire to expand her own.

“Even though it was a forced and very emotionally difficult time, it allowed me to kind of build up my social stores in a way where now I'm kind of like, ‘Bring it on,’” she states. Looking ahead, Beetz is clear on her direction as an artist, saying plainly, “I want to work, I want to engage and I want to share.”

Fashion From Top to Bottom:

For full Where to Buy info, pick up the September/October 2021 issue of ESSENCE, on newsstands now.