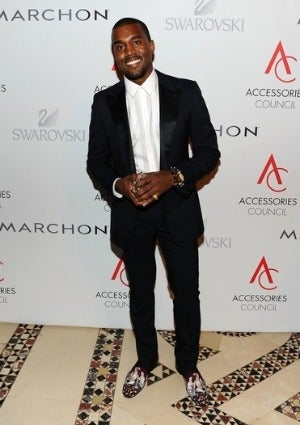 Between his style saturated “Runaway” video, following fifteen models on Twitter and attending every fashion show from New York to Milan, Kanye West’s couture campaign has been going full blast. He was finally rewarded for his efforts when he was named “Stylemaker of the Year” last night by the Accessories Council at Cipriani’s in New York City. In true Kanye fashion, his speech was interesting. Check out our favorite excerpts: “Why, if someone is good in one field can they not be accepted or given the slightest opportunity to express and be creative in other fields?” “I thank Marc Jacobs so much for giving me the opportunity to design a shoe for Louis Vuitton, but the thing that broke my heart most was when they said, ‘You’re finished. The shoe’s finished.'” “I feel convicted. I feel a level of honesty. I feel a level of truth. I feel like a 5-year-old. I feel like I’m getting closer to the 5-year-old inside of me and I feel like I have to represent that 5-year-old, even, even at the risk of my public.” “So many people in this room, they can’t even go on vacation without being creative. They can’t sit on the beach, they have to create constantly. And that’s how I feel with this album coming out.” “(I feel) Convicted right now. Thirty-three-years-old, still creating art. It’s rage, it’s creativity, it’s pain, it’s hurt, but it’s the opportunity to still have my voice get out there through music. To let my pain hit the radio and thank you for this moment of acceptance.”