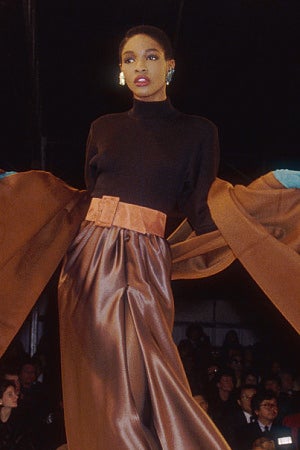 With stylish celebs like Solange and Janet Jackson lopping off their long locks, we can’t help but be reminded of short-haired ’90s supermodel, Roshumba Williams. The six-foot-tall, mocha-skinned teen was discovered by Yves Saint Laurent in 1987, quickly became a top runway model, and began steaming up the covers of Vogue, Elle, Cosmopolitan and Harper’s Bazaar. Her lithe, athletic build landed her on the pages of Sports Illustrated “Swimsuit” edition, where she was the first featured African American model to land four consecutive issues, from 1990-1994 (here she is, pictured in 1992)! Ultimately, Williams aspired to be much more than one of the world’s most sought-after mannequins. She appeared in movies like “Celebrity,” “Pret-a-Porter,” and “Beauty Shop”; published a book, “The Complete Idiot’s Guide to Being a Model;” and was a judge on Oxygen’s hair-styling competition series, “Tease.” Despite the different hats she wears, we’ll always salute Williams as a groundbreaking Black beauty pioneer–she had the confidence to rock a short natural at a time when long weaves and wigs were the Black model standard. We love you, Roshumba!