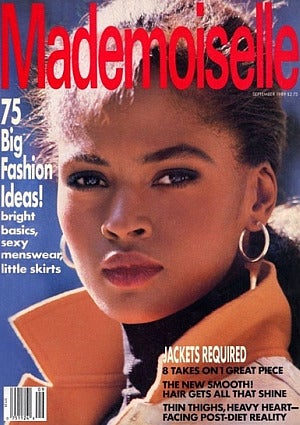 In the late Eighties and early Nineties, few models were as celebrated as Karen Alexander. The New Jersey-born supermodel was a muse to the fashion world’s top designers and magazine editors, and it’s not hard to see why. With her strong brows, burnt sienna skin and born-to-wear bikinis-body, Alexander was equal parts “hot” and “haute!”

At a time when Cindy Crawford and Linda Evangelista ruled the modeling world, Alexander landed some of the top campaigns of the moment, like Cover Girl, Tiffany & Co, and Chanel’s Allure fragrance; and graced the covers of Vogue, Elle, Glamour, Mademoiselle, and Harper’s Bazaar (a feat many white models couldn’t pull off!).

Her career hit the stratosphere when she appeared in the coveted Sports Illustrated Swimsuit Issues in 1988 and 1989 — and the following year, when Alexander graced People magazine’s inaugural list of 50 Most Beautiful People, her status as one of the world’s hottest supermodels was secured.

These days, the Ford model takes occassional modeling jobs (like the gorgeous GAP spread she shot with her family a couple of seasons ago), but she’s focused on raising her two stunning daughters, Ella and Zora. Karen Alexander, you’re one of the most beautiful Black women ever… and we salute you!