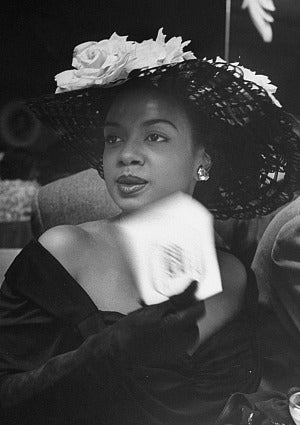 During her heyday in the 1930s and ’40s, jazz pianist Hazel Scott was one of the most glamorous women in show business. Besides starring in several movies, releasing hit albums and running with a crowd of movers and shakers like Lena Horne and James Baldwin, Scott also had an undeniably dazzling personal style and grace. The Trinidad and Tobango-born, piano-playing prodigy moved to New York City at 4, and immediately began performing professionally. After training at Juilliard, her career took off. She performed her unique boogie-woogie-meets-jazz-and-blues style at Carnegie Hall, and recorded hit albums like “Relaxed Piano Moods,” regarded by historians as one of the most important jazz piano albums of all time! Her talent and beauty landed her roles in films like “Broadway Rhythm” and “Rhapsody in Blue,” and in 1950, she became the first Black woman to have her own TV show, “The Hazel Scott Show.” Scott was also one half of one of Black America’s most accomplished power couples; her husband, Adam Clayton Powell, Jr., was New York’s first black congressman. Hazel Scott was a fabulous career woman, wife and mother, and we salute her fierceness!
Loading the player...