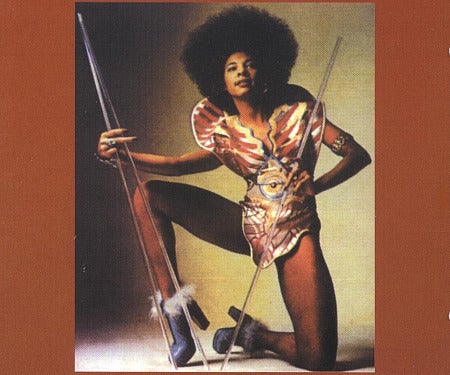 Before there was Rihanna, Kelis, or even Grace Jones, funk music pioneer Betty Davis had cornered the market on cool, punky-alien Black girl style. Between 1972 and 1975, she released three psychedelic funk/rock albums — “Betty Davis,” “They Say I’m Different” and “Nasty Gal” — that are revered by music afficionados and record collectors for their impossibly funky, shockingly sexual lyrics (Davis was way before her time).

Her music was genius, but her style might even have had a further reach: Her science fiction-esque getups, thigh-high boots, hot pants, animal skin leotards and buckets of fringe and feathers can be seen all over today’s runways! Betty Mabry got her start as a model in the ’60s, posing for Ebony, Seventeen, and Glamour, and in 1968, she married Miles Davis.

Her way-out-there aesthetic and impeccable musical taste was a great influence on the jazz icon — as well as on her good friend, Jimi Hendrix — and she’s credited with being Davis’ muse for his classic album, “Bitches Brew” (allegedly, he wanted to call it “Witches Brew,” but she convinced him to change it!). After divorcing the icon a year later, Betty Davis decided to launch her own musical career, working with musicians from bands like Santana and Sly & the Family Stone. Even though Davis’ albums weren’t commercial successes, her cult status earned her the moniker ‘High Priestess of Funk.’  But for us, it’s all about her bold, unabashedly sexy, take-no-prisoners style.

Go ‘head with your funky self, Nasty Gal!