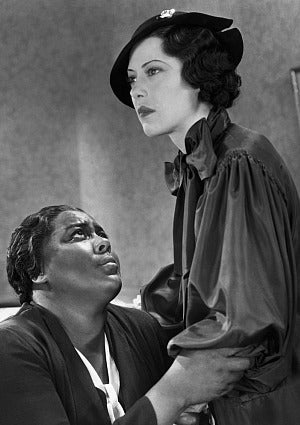 Long before Halle, Dorothy or Lena ever dreamed of becoming actresses, Fredi Washington starred in one of film history’s most important movies about race, 1934’s The Imitation of Life. The story, which follows a biracial young woman who rejects her Black mother in order to “pass,” struck a chord with Depression-era audiences and was nominated for a Best Picture Oscar. And yet, despite 29-year-old Washington’s haunting performance as Peola, she was never able to truly make it in Hollywood. Studio heads had no idea what to do with an African-American woman with an ivory complexion, pale green eyes and straight hair! Considered too beautiful to play servant roles (the only mainstream opportunities for Black actresses in the ’30s), Washington wore dark, heavy makeup in independent features geared towards Black audiences. After turning down several roles requiring her to pass for White, Washington quit movies, moving to New York City to become an activist and writer. In 1937, she co-founded the Negro Actors Guild of America (NAG); and worked tirelessly with the NAACP to demand less stereotypical roles for Black actors. She also was the theater writer for People’s Voice, an African-American newspaper founded by pioneering politician Adam Clayton Powell (her sister, Isabel, was his wife). In the 1950s, Washington also served as a casting consultant for two iconic films, Carmen Jones and Porgy and Bess. As driven and civic-minded as she was beautiful, we’ll never forget Fredi Washington’s role in Hollywood and Civil Rights history! Read More: