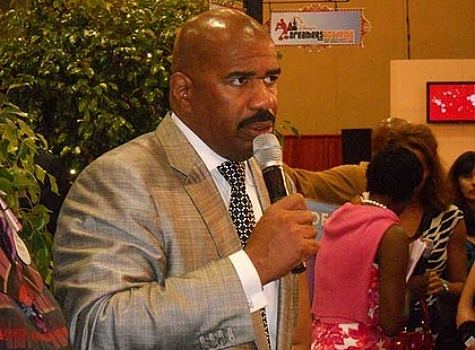 Comedian and author Steve Harvey had everyone at the ESSENCE Music Festival in stitches as he answered audience questions about relationships at the end of his day-long Empowerment Seminar. There were many moments of laughter, and reflection as Harvey spoke on everything from why a man won’t ask you to marry him and why we shouldn’t focus on interracial relationships. Here’s what the author of “Act Like a Lady, Think like a Man” had to say about the these hot-button issues, in his own words… On dressing the part so men can respect you: “You cannot expect a man to treat you special if you do not treat yourself special. If you’re wearing clothing that’s showing everything out for everybody to see, we already know you don’t have anything special and you cannot expect us to treat you special. If you don’t give a damn about who’s looking at your body, then guess what, we’re not going to treat you special.” On waiting on a man you think has potential: “The question women have to ask themselves is ‘how long should you wait for a guy to get it together if he has potential?’ What you have to understand is that potential is a verb, it’s an action. Potential isn’t laying on the sofa playing video games. Potential isn’t unemployed. Potential is a guy with a plan, who is working and actively trying to get it together.” On getting a man to pop the question: “Ladies, I have to put that one on you. If you’ve been in a relationship with a man for x number of years and he still hasn’t asked you to marry him, it’s your fault. Let me explain: the dream of marriage is a woman’s dream. You’re the one who cares about whether you’ll have doves, and whether you’re gonna ride in a pony. The day is your dream. All a man dreams about is the woman. If we can get the woman of our dream without the ring, we’re cool. If you have a man and he loves you and he wants you, you have to let him know from the jump that in order to be with you he has to marry you. He sleeps with you, y’a” do thing ya’ll ain’t got no business doing, y’all pay bills together. You’re doing everything he needs from the woman of his dreams but you have not gone to hims and told him that in order to continue to have all this that you bring to the table, he needs to put a ring on it.” On interracial relationships: “Hill Harper told me this one and I kept it with me: Only six percent of married African-American men marry outside the race. Y’all just see the famous ones and think that Black men have this fascination with White women. You do have Black men that do that, but guess what, Black women do it too. It’s more of a myth than you think it is. Women, give yourself a break and take that one off your meter.”
Loading the player...