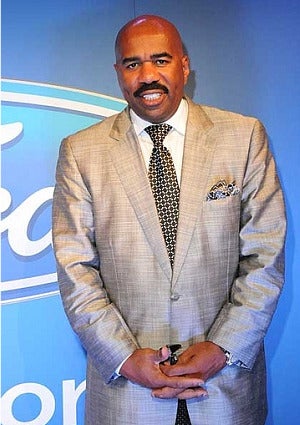 Disney’s Dreamers Academy with Steve Harvey announced a partnership made in heaven, joining forces with ESSENCE Magazine to help encourage high school students to achieve their goals. Each year, the mentoring program gathers 100 high school students from around the U.S. for a long weekend of career and self-development workshops and seminars. “We are in the ‘changing children’s lives’ business,” Steve Harvey said at a press conference at the ESSENCE Music Festival. Harvey explained that the partnership with ESSENCE was paramount since the magazine speaks to “women who have young men and young women who need help with their children.” ESSENCE Editor-In-Chief Angela Burt-Murray echoed Harvey’s sentiments, saying, “We know we’re going to make a thousand more dreams come true!” At the press conference, Harvey couldn’t help but compliment Burt-Murray’s fierce patent-leather open-toe stiletto heels, telling all the ladies to “get your shoe game on.” One lady whose game was tight was Princess Tiana. The newest Disney Princess made a cameo in her signature gown and tiara at the end of the announcement.