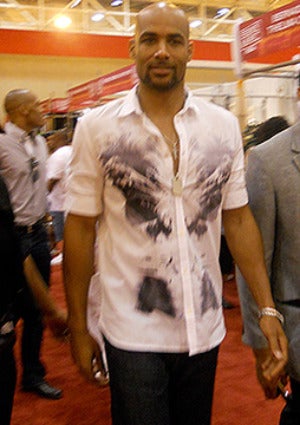 Actor Boris Kodjoe took in the sights and sounds of the ESSENCE Music Festival. He spoke with ESSENCE.com about his new NBC drama “Undercovers” premiering in the Fall, his new fashion line and being a sex symbol. ESSENCE.com: It’s great to see you at the ESSENCE Music Festival. Why was it important for you to be here? BORIS KODJOE: I think it’s important to reach out to your own people so you’re in touch with what’s going on. We are an under served audience so I think that every chance I get to make that connection and to stay in touch is tremendously important. ESSENCE.com: You have a sci-fi movie and a TV drama coming out in the Fall. You play a spy in the NBC drama “Undercovers,” which is a little bit of a departure from the roles we’re used to seeing you in. Has that been an easy transition? KODJOE: As an actor you gotta be ready. Hollywood likes to label people and put them in a box and you have to wait your turn to do something different. This was my chance and I’m gonna make the best of it. ESSENCE.com: How would you describe “Undercovers”? KODJOE: It’s about a married couple trying to maintain their relationship through obstacles and these adventures that they go on because they’re spies. It’s truly solid down-home relationship stuff that we can relate to. There’s also an escapism element because we travel to all these exotic locales and kick some butt. ESSENCE.com: You also have a new fashion line called ALFA. What was the motivation behind starting a clothing line? KODJOE: As a former model I was always interested in fashion. My brother actually brought me the concept of mass customization, which means we offer custom-made clothing to everybody. Only rich people used to be able to afford customized clothing, until now. We’re making it available to everyone. Once you wear a customized shirt it changes everything because it truly is a a true fit. Customized shirts usually cost $200 and up and we’ve made it available for $30. We have shirts right now and we’ll have customized suits for men and women soon. ESSENCE.com: Women are screaming for you everywhere you walk at the ESSENCE Music Festival. How do you feel about being considered a sex symbol? KODJOE: I don’t take it seriously. It’s something that comes up but it’s not what I focus on in my life. People talk about what’s important in Hollywood and the “it” factor but it’s such a random industry and you have to be tremendously blessed and lucky. I don’t take it for granted because I’ve been very lucky so all I can do is always keep my laces tied and ready for when the opportunity comes. If you’re prepared, I believe good things can happen. Catch Boris Kodjoe in the new NBC drama “Undercovers” premiering this Fall.