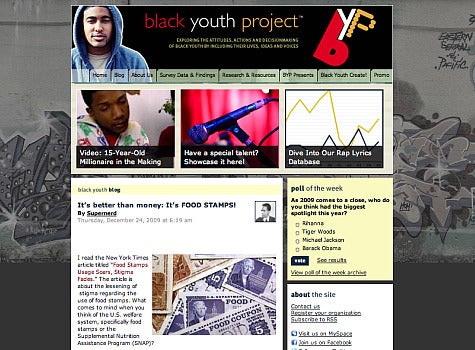 It’s no secret that a lot of Black youth feel ignored by popular culture and the government. However, it’s also true that young African Americans seem more hopeful than before about their futures. The University of Chicago has created a place for young Black people to voice their frustrations and hopes and to give insight into the African American experience in the 2000’s with The Black Youth Project.

Established last month by the university’s School of Social Service Administration, The Black Youth Project is a blogging Web site that allows AA youth to comment on politics and pop culture through videos, music and blog posts. It also provides the perfect platform for researchers to learn more about the feelings of young black people. In fact the BYP is the result of a national survey conducted years ago combined with interviews that provided a good image of what Black young people think about music, sex, religion, and society.


Forty-eight percent of the youths surveyed said they believed the government treats most immigrants better than most black people, an ABC News article reads.

Still, this is a group that believes it is possible to make a difference through political participation. In the past two years, Ms. Cohen says, black youths felt incredibly energized by Barack Obama, both as a candidate and as president – although they still tend to feel suspicious of how the government responds to their needs.


With Black Youth Project, Black young adults can discuss their place in society and also celebrate their contributions to pop culture. BYT features a Web page with hip hop lyrics, and a culture page where young people post videos of dancing, music videos and other types of performance.

Political science professor and the head investigator in BYT Cathy Cohen told ABC, “We talk about it as a hub. The Web site isn’t going to solve these problems [facing African-American youths], but hopefully it can help facilitate dialogue and discourse and offer data that’s ultimately needed … so that we’re listening to and being led by young black people.”