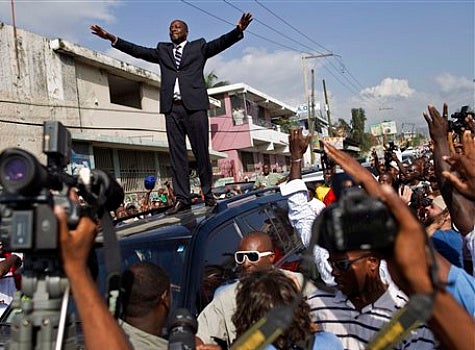 Wyclef Jean made his run for President of Haiti official on Wednesday. After stepping down from his position as Chairman of the Yele Haiti Foundation — the charity he created five years ago for Haitian relief efforts, which was recently accused of tricky accounting — he submitted paperwork declaring his candidacy under the Viv Ansanm party. Following the declaration, Jean held a concert/rally for his supporters in Port-au-Prince. The former Fugee frontman soon after appeared on CNN’s “Larry King Live” to explain the reasons for his candidacy. “After January 12 … being out here with my wife and picking up dead bodies from the ground, I felt that because of the youth of Haiti and the population that this is not even Wyclef saying that ‘I want to be the President of Haiti,'” he explains. “I feel like I’m being drafted by the population right now to give them a different face, a different voice.” Haiti’s eight-member provisional electoral council will determine if Jean fits all the requirements of a proper candidate. Since he left Haiti in his youth, he must prove that he never renounced his citizenship by holding another country’s passport. He must also prove that he’s a resident for the last five years — which he is looking to overturn using his official status as “Haitian Ambassador-at-Large.” Wyclef’s interest in the presidency has led to scrutiny of his business transactions. It has recently surfaced that he may owe $2.1 million in back U.S. taxes. Oh, and Pras — Wyclef’s former Fugee bandmate — is rooting for ‘Clef’s opponent in the election. Ouch!