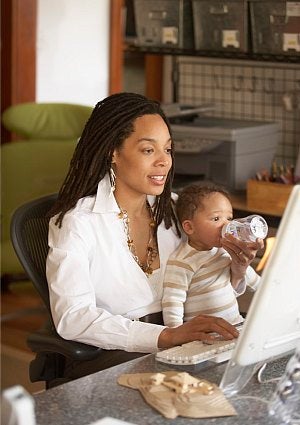 Almost all new moms can relate to that pang of guilt we feel each time we’re racing to pick up our infant from childcare after yet another long day at work. “Is my baby spending more time bonding with the daycare provider than with me?” we ask ourselves. New mothers can breathe a sigh of relief, if only momentarily. A new Columbia University study on the consequences of mothers returning to work concludes that children with working moms don’t necessarily suffer developmental setbacks as previously thought, reports the Washington Post.  Previous research has leaned toward the idea that first-year maternal employment was detrimental to a child’s cognitive development. But now researchers from the National Institute of Child Health and Human Development Study of Early Child Care are saying that the effect of first-year employment is “neutral,” which means that the benefits of working moms (higher income, higher quality child-care) outweigh the negative. But while moms who work full-time during their child’s first year did not have a negative effect on their child’s development, the outcome was often more positive for children whose mothers work only part-time. Children whose mothers worked less than 30 hours a week were found to have better cognitive and social development and benefited more from parental interaction. Interestingly enough, working moms were thought to have better mental health and were also found to display a greater “maternal sensitivity” toward their children than stay-at-home moms. Does a mom who has spent the majority of the day away from her child react differently to the baby’s needs more than a mom who has been home with one the whole day? Perhaps. Three out of five mothers in the U.S. work full-time in their first year of parenthood. Do you think your child was affected by you returning to work after giving birth?