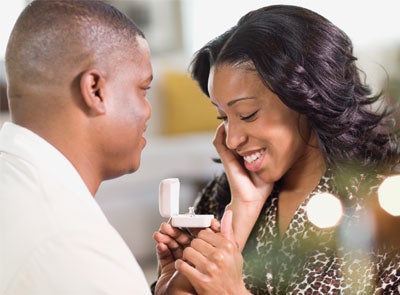 Your boo dropped to one knee. He rocked the proposal. Your friends have inspected the ring. Your family has bum-rushed the wedding planning. And all the hubbub that goes along with preparing for marriage is in full swing, but there’s another question to be popped: to hyphenate the last name or not to hyphenate?

After a year and a half together, my man and I are in early negotiations — that contemplative “what-if” stage that places the relationship in front of a firing squad of random questions. One of those chats kicked up dust as we talked about my dreams of finishing (which means I’d actually have to start) my PhD within the next five years.

In the midst of my daydreaming, I took my would-be hyphenated last name for a test drive. “Dr. Janelle Harris-Williams,” I swooned. Boyfriend jutted his bottom jaw, a habit he has when he’s about to serve up a verbal smackdown. “Harris-Williams!” he snorted. “I think you mean Dr. Janelle Williams.”

From what I gather via his sarcastic remark, the idea of me tacking his last name onto the one I already have is offensive. That two-part surname — according to him — says I’m wishy-washy about my commitment and is a neon flashing sign that I’m not ready to leave my family to be a wife.

Heck with all that. As far as I’m concerned, there’s no level-headed reason why a woman should have to abandon her born-and-bred last name in order to prove her fidelity and allegiance to her man. None whatsoever. The concept is as archaic and patriarchal as, oh, I don’t know, forgoing your dreams to be an apron-sporting housewife or dumbing down your intelligence and success to appease your dude’s fragile ego. Fail.

According to the 2010 Real Weddings Survey released by The Knot, only 6 percent of newlywed women opted to hyphenate their names — the same number reported on the stats from the prior year. Of the roughly 20,000 brides polled, responses overwhelmingly favored taking their hubby’s name, to the tune of 86 percent.

It’s not necessarily a fire-hot trend. I’m in a bit of a minority. At least I’m not flying completely solo. Many of us who have worked hellishly to build up some steam in our respective careers have, at the very least, professional grounds to hold on to our original surnames. If Jada Smith or Carol Braun were headliners for an event, the crickets would be chirping and we’d gloss over them like they were as generic and nondescript as Jane Jones. But add the “Pinkett” or the “Moseley” respectively, the bells and whistles of familiarity go off and the general public might contemplate going to whatever shindig they’re pushing. Might.

Because the average age of the American bride is now 27 (up from 25 last year, but who’s counting?), many women don’t want the hassle of converting their longstanding professional identities; email addresses, Google searchability and all — to a whole new name.

But aside from all that, my family raised me to be the woman that Mr. Williams wants to marry, just like his family made him into the man that I love and respect. Why do I have to be the one to lop off that identity and start completely anew? What exactly does a man have to give up in order to marry a woman? Fewer evenings at the shaker joint and neater housecleaning habits? If I had been born male, I would’ve had no choice but to carry on the Harris name. I want to rep my grandparents and their lineage just like any junior or III does. But because I have an innie, not an outie, I’m forced to show my post-marital pride by sloughing part of my me-ness.

Not I, said the brown cow. At the very least, brothers should support their woman’s right to choose if they want to keep the old while forging ahead with the new, not give them grief for wanting to do it. Can’t our hyphens rep for both our pasts and our futures — and have a nice ring to them in the process?