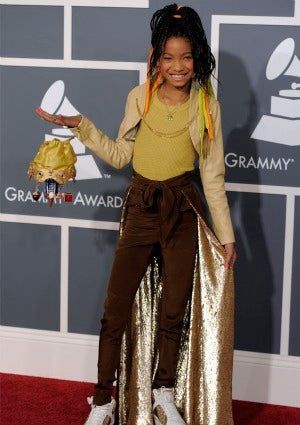 For a 10-year-old pop prodigy, it seems like Willow Smith has it all. Superstar parents, trailblazing career, and now a new music mentor. The “Whip My Hair” star recently said she is working with rap royal Jay-Z on her debut album slated for release this summer…

“Whenever I have a creative block, he’s always like, ‘Do what artists do when they have a block. Make a song about it,'” Smith told Kiss FM. The Roc Nation star said the rapper has been more of a coach than a boss.

In previous interviews, Jay-Z has made his support for the young-hair whipper very known.   “I believe in superstars. I believe in big records and in superstars and I think [Willow] has both,” Jay-Z told US Magazine. “She has a child’s innocence but she has a clear vision of who she is and who she wants to be.”

We can’t wait for Willow’s album this summer – in the meantime, check out her latest music video for her hit single, “21st Century Girl!”