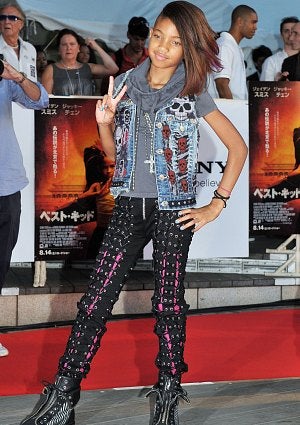 Willow Smith — daughter of Hollywood power couple Will Smith and Jada Pinkett-Smith — recently raised eyebrows, when the 9-year-old wore a denim jacket with skulls on it and laced up pants on the red carpet of the Japanese premiere of “The Karate Kid” which stars her big brother Jaden. Some are arguing that the outfit and overall Willow Smith look is just too grownup for her age. “Willow really has her own sense of style. She’s extremely versatile,” Mariel Haenn, Smith’s stylist — who also styles Rihanna — told HollywoodLife.com. “She’s a rock star and she likes everything to have a rock ‘n’ roll feel to it. An edginess.” What do you think? Is Willow Smith’s “rock ‘n’ roll style too edgy for a 9-year-old, or is she just having fun with fashion?