Jennifer Hamilton gave her husband the best birthday gift ever, and he didn’t even have to unwrap anything.

Instead of going the classic cuff links gift route, yesterday Jennifer–otherwise known as Jenn–decided to show the world (and her husband) just how much she loved him by doing the last thing he’d expect her to.

In an interview with Mashable, Gary Hamilton explained how the night before his 32nd birthday, his wife went around the city posting freshly printed fliers with a loving message on them requesting a little help from strangers. Beneath a precious photo of just his smile, Jenn asked anyone who read it to send Gary a birthday wish on either Instagram or Twitter using #32is32. “She wrote, ‘He’s seriously the best,’ but the real truth is that she is,” said Gary.

Gary’s phone buzzed non-stop with birthday messages from random strangers all day. He admitted that at first, all of the online attention made him feel a mixture of shock and embarrassment. “But the fact that it was Jenn’s idea and people that don’t even know me took time out of their busy New York City schedules to help celebrate my day was pretty awesome,” said Gary.  He received messages from all over Manhattan and the outer boroughs.

“At times, people feel like in order for a birthday to feel special, they have to spend gratuitous amounts of money to make the day special, but that’s not always the case [here],” said lucky hubby Hamilton.

And we agree. This has to be one of the sweetest ways social media has ever been used for a birthday surprise. What do you think?

Check out what one of the fliers looks like here: 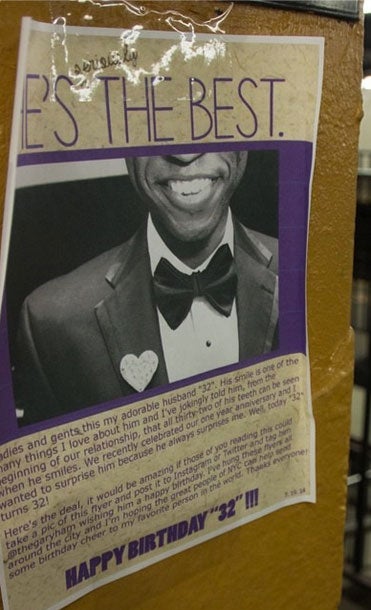