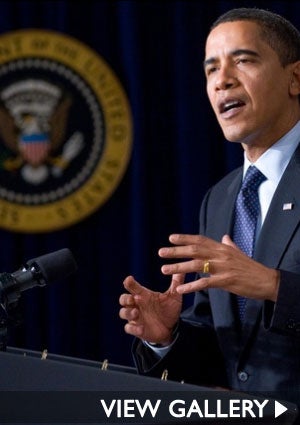 A sweetly inconsequential story from June: The president of the United States took his daughters out for ice cream. Trailed by their security detail, they walked into an ice cream parlor in Virginia and ordered vanilla custards, along with a bag of frozen “puppy pops” for their dog.

Doubtless some of us watched with an ineffable wistfulness that was difficult to place, yet real and immediate as overdue bills and broken down cars. There was, after all, something ordinarily extraordinary in the sight of an African-American man spending Saturday afternoon being father to his little girls. And watching, maybe you heard a cynical, accusatory something whisper up from that sub-basement of the soul where dark thoughts are stored:

Too good to be true.

It has long been a subtext of the Obama phenomenon, the notion that there is something Central Casting, something impossibly perfect, about this family, this black family–the kids perky and cute, the mother beautiful and accomplished, the father smart and caring. It’s like the Huxtables were elected when nobody was looking.

The axiom says that which seems too good to be true probably is. So there’s nothing wrong with reminding ourselves that this family surely has its flaws as any family does. A certain amount of skepticism is always a healthy thing.

But you wonder if, for some of us, “too good to be true” expresses not skepticism but rather, stark disbelief. As if we can longer imagine anyone–particularly African-American anyone’s–being that way. Let’s face it: this is not a vision of the African-American family one often gets to see. No, what we see more often is us in the midst of baby mama drama, missing fathers, disintegrating communities-us losing us.

And maybe in the process we forget that just because one doesn’t see a thing doesn’t mean it doesn’t exist. Barack Obama is a celebrated but hardly unique reminder that even in the midst of maelstrom, some of us still hold tight to family love.

No pool reporter chronicled it, no security detail followed them around, but somewhere that same Saturday afternoon, some other brother times untold millions was engaged in the same ordinary extraordinary act of being a father to his children.

For more on Black Men in the Age of President Obama, log on to CNN.com.