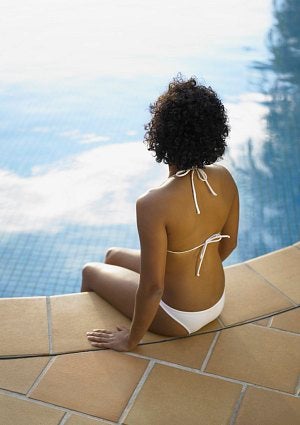 “Oh no, Black women don’t swim,” declares Michael Hawkins, an instructor at the Hair Design Institute in Manhattan. Hawkins goes on to tell New York radio station WNYC about a familiar refrain he hears from stylists talking about clients. “She’s not getting her hair wet. No, that’s not gonna happen.” In a radio report titled “Chlorine and Curls: Why Many Black Women Won’t Go Swimming” WNYC’s Jenna Flanagan goes to great lengths to examine why Black women aren’t exactly enthusiastic about getting more than their feet wet in swimming pools. First, there’s the issue of chemical relaxers, which makes hair more susceptible to chlorine damage. “A lot of the chlorine in the water, sometimes the salt or whatever works against the actual relaxer that you put in the hair. So over time you end up having breakage or hair shedding, coming out, things like that,” adds Hawkins. Then there’s the issue of beauty. Ann Mourning, an Assistant Professor of Sociology at New York University who specializes in race and ethnicity, thinks the issue goes beyond aesthetics and is rooted in antebellum America, “when long straight hair was the one of the most symbolic markers of beauty.” With that in mind, it’s no wonder Madame CJ Walker was the first Black millionaire for creating products for Black women that not only made them beautiful but “respectable.” “The hair issue is not just a beauty issue for Black women,” says Mourning. “It traditionally has all this other meaning that went well beyond sexual attractiveness. It has everything to do with being a respectable, worthy member of the community.” Mourning also connects Black women’s resistance to pools to segregation. “Not only were public pools off-limits to Black people, but there was also this sense that that would just be an unbearably intimate kind of place for Blacks and Whites to mix.” Flanagan ends her report from a YMCA swimming class in Newark, New Jersey. The students are all boys. What do you think?