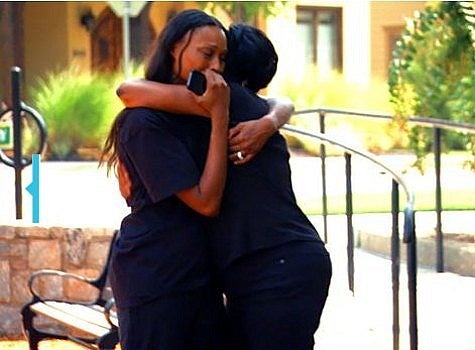 On the season finale of “Real Housewives of Atlanta” season three, we gave a unanimous side eye when we watched Cynthia Bailey’s mother and sister hide Cynthia and Peter’s wedding certificate on their big day as an attempt to stop the nuptials. What would you do in that situation?

That’s exactly what we asked relationships commentators Demetria L. Lucas (ESSENCE Magazine, A Belle in Brooklyn) and NWSO (Naked with Socks On). They gave us the woman’s and man’s perspective on what they would do in Cynthia’s position…

SHE SAID
ESSENCE.com: What should you do if your friends and family don’t like your man?
DEMETRIA LUCAS: It depends on why they don’t like him and if you think their reasons are valid. Maybe they don’t think he’s “good enough” for you, or they don’t like how you behave around him or maybe they think he’s a dog. And maybe they are right, but the bottom line is it’s your relationship. You are the person that has to love him, spend time with him, and make love to him. As an adult you have to decide what you want to put up with (if anything) or not. It’s not their relationship, it’s yours.

If your friends and family don’t like your man to the point that they are disrespectful to him, then you have to step in and check them on it. It’s fine to not like him but to disrespect him and your relationship is out of order. We’re all adults, we should be able to be civil to one another.

HE SAID
ESSENCE.com: Does it matter to you if your girlfriend’s friends or family don’t like you?
NWSO: No, because at the end of the day she and I are the ones in the relationship, not them. As long as she trusts and loves me, that’s all that matters. However, if we’re working on building a serious relationship with each other, it would be nice to have the blessing of her partner’s family and friends. Otherwise it puts her in a tough spot of always having to defend me and our relationship. That can be a huge burden to bear.

As far as staying in the relationship, that would depend on the feelings involved and how the dislike is affecting our relationship, as well as how much interaction I have to have with the folks that don’t like me. If there’s a constant personal attack from her family and friends to the point where I feel like I have to defend myself every five minutes, that strain can get to be too much. In that case I’d have to evaluate if it’s really worth it, especially if my woman wasn’t supporting and defending me.

But I wouldn’t just end a relationship because people outside our relationship didn’t like us together, especially if this was someone I was in love with and saw a future with. They’d have to learn to live with it and let the relationship run its course. Besides what they think, they’d have to understand that there must be some good in me that she sees. Perhaps they could
see it too if they just gave me a chance.

SHE SAID
ESSENCE.com: What would you do if your friends or family urged you not to marry your husband?
LUCAS: In Cynthia’s case, her family was reflecting what they were sensing from her. She didn’t know if she wanted to get married to Peter and her family was telling her, “Hey, you don’t have to do this, you know? If you’re not sure, don’t do it!” Cynthia’s outlook was, “If it doesn’t work, I can just get divorced.” That’s a horrible mindset to have going into a marriage and I see why, initially, her family was discouraging her. After she made up her mind that she was going to do it though, they should have dropped the subject. I know they’re concerned, but she’s an adult who can decide her life for herself.

If the bride is gung-ho to get married, it’s unacceptable for someone, even close friends and family, to step in to discourage her. It’s better to do before the wedding than after, but we’re again talking about adults who can make their own decisions. It’s her life to do as she chooses. Who are you, even as her mother, to interfere in that on her wedding day, of all times? That’s more about control than concern for her well-being.

HE SAID
ESSENCE.com: What would you do if your fiancee’s friends or family urged her not to marry you?
NWSO: I would feel extremely disrespected for someone to try and talk my bride out of marrying me on the actual wedding day. I’m sure they would have had plenty of failed chances [beforehand] to plead their case and clearly she didn’t listen. Our wedding day is supposed to be about us and it’s selfish of that person to try and ruin the day.

As for what Cynthia’s mom and sister did with hiding the marriage certificate, that’s even more disrespectful. If they had kept it hidden long enough to where the wedding couldn’t take place, that would have been a major embarrassment to their daughter and sister and a loss of tons of money that they didn’t even have to lose. If it were me, I would have to disown my family members for that, and even consider taking them to court for emotional distress and my financial loss.

About Her: Demetria L. Lucas is ESSENCE’s Relationships Editor and the author of A Belle in Brooklyn: Advice for Living Your Single Life & Enjoying Mr. Right Now (Atria), which will be released in June. Pre-order her book now on Amazon.

About Him: NWSO is the brains behind the popular, award-winning Website “Naked with Socks On,” where thousands of readers come daily to discuss sex, relationships, pop culture and politics.