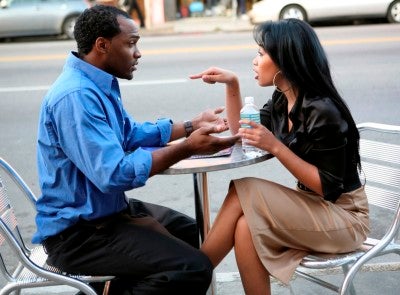 I can tell by the way my eyes burn that it’s not 10 A.M. I was out ’til five, dancing at the Wonder-full party, an annual ode to Stevie Wonder and his gift of music. It’s too early on a Sunday for anyone without kids and a weekend shift at work to be up. Oh, and folks headed to the early service. I roll over and pull the pillow over my head…

I can’t. I roll back over and snatch the BlackBerry off the nightstand. It’s a 202 number. Someone from back home. Anyone who would call me from there is family or friend and they all know I’m no good before 11. Maybe it’s an emergency.  ”

“May I speak to Demetria?” It’s a woman.

“Is Allister with you?”

Me: Who am I speaking too?

Her: Is my boyfriend in New York to see you before he leaves?

Mind you, I have no clue who Allister is, much less where he’s leaving from or going. And yes, I could say that. But I want to know who Allister is and how and why he allowed this crazy woman to get my number and actually use it.

Me: (in my most annoyed voice possible.) Who am I speaking to?

Of course, she calls back. I don’t answer. (After the second ring I put the phone on silent.) Let her drive herself crazy, a punishment of sorts for waking up a woman she doesn’t know on a Sunday morning to ask about a man the woman doesn’t know and then, calling her out of her name.

I try to go back to sleep, but of course, I can’t. I’m staring at the ceiling racking my brain trying to figure out who the heck Allister is?   Takes me five minutes to realize, “Oh!!! Him?”

I log on to my laptop to find this article about my dating techniques that was featured in a DC paper. The writer  asked me to demonstrate how “cutie runs” work on a random man who was sitting nearby. Nice guy. Cute. Said he was headed to the Middle East in a few months to learn fluent Arabic. We chatted for 10 minutes, exchanged info and other than hitting me via Facebook when the article came out, we’d never been in contact. I guess he kept my number.

I didn’t have his, so I sent him a message on Facebook about the woman who’d called. He hit me back quickly, apologizing profusely, denying adamantly that she was his girlfriend or he had any form of a relationship with her, and attributed her call to a stolen phone.

We never spoke again. There was nothing to say before, and much less after.

I didn’t hear from his non-girlfriend, girlfriend again either, but every now and again, I wonder about her. There’s a certain type of woman — dramatic and insecure — who calls another woman to ask about her man. That type of woman is also borderline delusional about her relationship.

Here’s a tip, which I hope she, whoever she was, picked up along the way: if you need to call another woman to get clarity about what’s going on with your man, you’re with the wrong one. Whatever problem or insecurity you have with him, you need to take it up with him, not anybody else. I wonder how long it took her to figure that out, or if she ever did.

Demetria L. Lucas is the Relationship Editor at Essence Magazine and the author of A Belle in Brooklyn: Your Go-to Girl for Advice for Living Your Best Single Life (Atria). Pre-order her upcoming book on Amazon.com