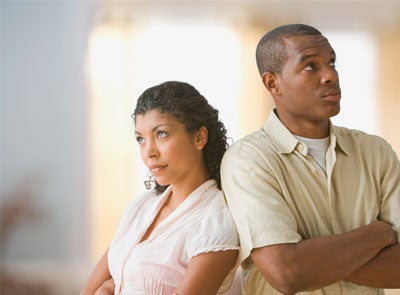 While an out-and-out rejection from a man you like can be painful, there is something a lot more threatening: the part-time lover. He likes you (or so he says) and he may even claim to care about you quite a bit. But he can’t commit to a relationship right now.

He’ll gladly spend some time with you, but you’re pretty much beholden to his schedule. When he wants to be there, he’s all in. But when he doesn’t, your phone calls and texts may go ignored and your requests for quality time, denied.

There are a number of factors that can explain the behavior of the non-committal, sorta-kinda beau. He may be recently out of a relationship and either uninterested in or even afraid of starting a new one. He might really enjoy your company, but fail to see you as someone he wants to settle down with, thus being content playing around until he finds something more serious. Or, more frighteningly, he may be seeing another woman and his spreading his time between you both. Unfortunately, whatever the reason is for your almost-man’s actions, it isn’t going to make you feel much better so long as you aren’t getting what you want.

How do you proceed? First, be honest with yourself. Are these pieces of a man enough for you, or do you need someone who is fully committed to a relationship? If you are okay with the casual dating, then continue it, but be sure that you manage your expectations appropriately. While you can take offense if your part-time lover flakes out on a date or breaks a promise, you cannot get upset if he continues his stance on exclusivity or a title. If someone tells you what they are going to do, then you shouldn’t be surprised when they do just that.

If you feel like Brandy’s “Almost Doesn’t Count” is speaking to your soul, then you gotta let him know sooner than later. If he feels that the possibility of losing you is worth adapting to your needs, then he may step up and give you what you ask. If he remains dead set on his ‘no relationship’ stance, then you have a responsibility to yourself to let him go if you  can’t see yourself getting past your desire for something serious. It may be painful or lonely at first, but you are doing yourself a major solid in the long run.

Women (and men) do themselves a disservice when they continue to deal with someone who they know isn’t interested in the same things as they are. Even when we say, “I know he’s not trying to be serious, I can handle that,” we are oftentimes secretly hoping that if the quality time, the sex and the home-cooked meals are good enough… he’ll see how wonderful we are. It doesn’t usually work that way. If he has resolved not to become your full-time lover, no amounts of Reverse Cowgirl or peach cobbler will convince him to do otherwise.

If you do decide that you can continue dating a man under these circumstances, be sure that you are at least careful not to grant him the rights and privileges befitting a “real” boyfriend. You don’t get a full-time salary for a part-time job, right? This is not the guy who should have your nose consistently open, nor should he be able to just call you up at anytime and have you in his presence within the hour. Don’t play yourself and give him access to your time, your body and your emotions at levels that won’t be matched. What he puts into this relationship should be what he gets out of it, and the same goes for you. Keep it fun, keep it light.

It may be hard for you to get past the idea of how PERFECT things could be, if only he’d just see you for the amazing and special woman that you are. But, dear sister, you are only writing the recipe for your own heartbreak so long as you try and force a square peg into a round hole. Your times and talents are better suited for a man who is actually open to the possibility of being in a relationship. The sooner you fire your part-time lover, the sooner you can find someone who wants the job and will work for all the benefits.