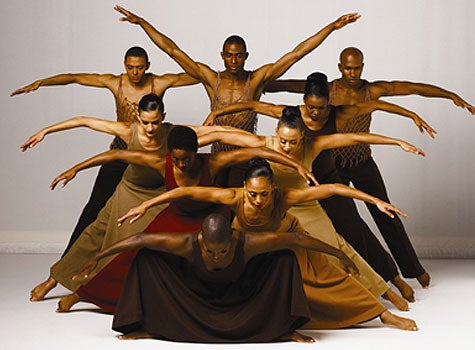 On a cold and snow covered afternoon, I weathered the elements to see the Alvin Ailey American Dance Theater at New York City Center. Mind you, I’ve seen Alvin Ailey performances most of my life–growing up in Cincinnati, Ohio and here in New York City. Ailey is an African-American institution, it is a part of our cultural DNA. Alvin Ailey was a visionary. And like many Black visionaries, his work still lives and breathes like the day it was created and conceived. It’s powerful, dramatic and soulful.

And while I have witnessed the Alvin Ailey American Dance Theater perform “Revelations” many times, it somehow has more resonance and meaning during the Obama era. It is current and comforting in these troubled times. It is uplifting and liberating. You see, Ailey grew up in the Great Depression down South in Texas. He lived through economic hardships and racial injustice and like a pheonix rose from the ashes to create something new, inspiring and groundbreaking. That’s what Black people do–it’s our survival mechanism.

A few days before Christmas, I sat inside the New York City Center and absorbed our collective souls, moving and emoting through Alvin Ailey’s vision–a mix of ballet, modern dance, jazz and African choreographed to a soundtrack of gospel, blues, drums and ’70s house music. It’s distinctly Black–with a global influence. But it was the third act during “Revelations” in which the spiritual “Wade in the Water” (a song Harriet Tubman and other revolutionaries used to warn fugitive slaves to avoid capture and find their way to freedom) resonated with me and took me to creative church.

Witness Alvin Ailey’s interpretation of “Wade in the Water.”
Like Alvin Ailey and his protogee and current Artistic Director Judith Jamison (who is celebrating her 20th year), remember to fly and soar with pride, confidence and freedom. It’s in our nature to do so.