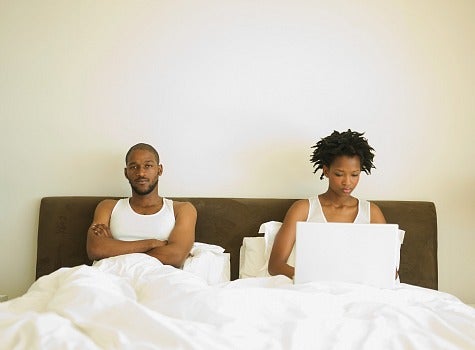 Before Kanye West made news for his feud with Matt Lauer, he made headlines for his digital deviance, with saucy pictures of the rapper circulating on the web. But Ye is certainly not the only guy digitally exposing himself. A recent survey revealed that one in 20 women have caught their boyfriends or husbands sending sexy messages and racy photos to other women, through mobile phones and social networking sites like Facebook. Moreover, a lot of ladies are on high alert — one third of the women surveyed admitted to snooping through their men’s phones and hacking into their Facebook accounts, and 28 percent said they’ve thought twice about calls from unknown numbers. It seems like the digital age has pushed trust right out the door. Would you hack into your man’s Facebook account to see if he was virtual flirting? Have you ever engaged in any virtual flirting of your own? Here’s what you had to say: Monique commented via Facebook: “Send sexy messages to my divorce attorney!” Alexis wrote via Facebook: “If any suspicion enters your mind you hve the right to hack into his Facebook account.”